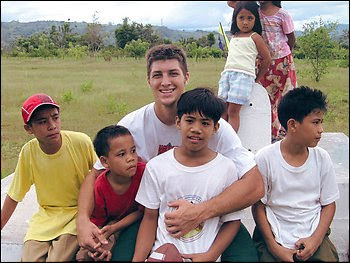 As I sat in my recliner watching some football this afternoon it reminded me of an article I had read. I thought it was good day to use it in my blog. I trust you are blessed and challenged by the article and that you will take the opportunity to put your faith to work on the field of play where God has put you.

America 's largest church has a capacity to hold 16,000. But while Tim Tebow
may not be a preacher, when he runs into the University of Florida 's
football Stadium-affectionately known as "The Swamp" -his congregation
numbers just over 90,000. And you can bet they're hearing Tim's
message.

It's not just that this University of Florida quarterback wears Bible verses
etched into his "eye-black" on game days. Tim Tebow has been making
headlines for more than simply his Heisman Trophy win as a sophomore and his
two national championships. This summer the New York Times, GQ, and Sports
Illustrated, all covered the quarterback's strong Christian faith.

Last year, when the Florida Gators won the national championship, the
pre-game show followed Tim into a local Florida prison where he can
regularly be found sharing his testimony and preaching the Gospel.

And this top-notch athlete, who spends his spring breaks and summers
ministering to orphans in the Philippines has actually helped change the
culture of the University of Florida . According to Sports Illustrated ,
"Since Tebow's arrival on campus, and in large part because of him, the
University has launched a series of community-service initiatives." Even
coach Urban Meyer has taken his family on a "Tebow-inspired mission trip to
the Dominican Republic ."

The press seems to be fascinated with outspoken Christian quarterbacks like
Tim Tebow; Sam Bradford, the 2008 Heisman winner; and now USC's Matt
Barkley. Only a few decades ago, it would have been taken for granted that
these would be the kinds of fellows any father would want his daughter to
marry. Now they are put under the microscope as some kind of curious
anomaly-well-known athletes who actually exhibit character.

In our doped-up, mug-shot celebrity culture, sadly these young men do look a
little out of step. And that's to our culture's shame. Perhaps that is why
last year when the press asked Tim Tebow a rather impertinent question-they
were more embarrassed by the response than he was. It was at a Southeastern
Conference news media event where one reporter asked in front of the crowded
room, "Are you a virgin?" Tim answered with an unequivocal yes and had yet
another platform to explain how his faith impacts every area of his life.

That platform for sharing the Gospel is exactly what Tim's parents prayed
for before he was born. Tim's father, Bob, a missionary in the Philippines,
had been weeping over the millions of babies aborted in America . It
was then that he prayed, "God, if you give me a son, if you give me Timmy,
I'll raise him to be a preacher."

Soon after, when Pam Tebow learned she was expecting, the parents' faith was
put to the test. After a series of grave complications, doctors encouraged
them to abort the child. They refused. Born small and weak, Timmy struggled
from the beginning. But his dad continued to tell him, "God's got a purpose
for you, and at some point, He's going to call you to preach."

Dad was right. God's message would come through the roar of the crowd,
beamed to millions via satellite. But little did they know, Tim would don a
jersey, not robes, and use a stadium for his pulpit.

Tim's a great example of an opportunity every believer has-to put our faith
to work on the field of play where God has gifted us and called us.

Let your light so shine before men, that they may see your good works, and glorify your Father which is in heaven.

Dear Lord, We pray that we will take the opportunity to serve you right where you have put us. We pray that the talents we have we will use and that they will bring honor to your name. In Jesus name, Amen.