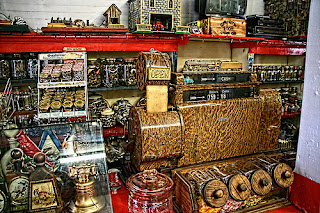 Colossians 3:13 (New International Version)
Bear with each other and forgive one another if any of you has a grievance against someone. Forgive as the Lord forgave you.

A story tells of a merchant in a small town who had identical twin sons. The boys worked for their father in the department store he owned and, when he died, they took over the store.
Everything went well until the day a dollar bill disappeared. One of the brothers had left the bill on the cash register and walked outside with a customer. When he returned, the money was gone. He asked his brother,
"Did you see that dollar bill on the cash register?"
His brother replied that he had not. But the young man kept probing and questioning. He would not let it alone.
"Dollar bills just don't get up and walk away! Surely you must have seen it!"
There was subtle accusation in his voice. Tempers began to rise. Resentment set in. Before long, a deep and bitter chasm divided the young men. They refused to speak. They finally decided they could no longer work together and a dividing wall was built down the center of the store. For twenty years hostility and bitterness grew, spreading to their families and to the community.
Then one day a man in an automobile licensed in another state stopped in front of the store. He walked in and asked the clerk,
"How long have you been here?"
The clerk replied that he'd been there all his life. The customer said,
"I must share something with you. Twenty years ago I was 'riding the rails' and came into this town in a boxcar. I hadn't eaten for three days. I came into this store from the back door and saw a dollar bill on the cash register. I put it in my pocket and walked out. All these years I haven't been able to forget that. I know it wasn't much money, but I had to come back and ask your forgiveness."
The stranger was amazed to see tears well up in the eyes of this middle-aged man.
"Would you please go next door and tell that same story to the man in the store?" he said.
Then the man was even more amazed to see two middle-aged men, who looked very much alike, embracing each other and weeping together in the front of the store. After twenty years, the brokenness was mended. The wall of resentment that divided them came down.
It is so often the little things -- like resentments -- that finally divide people. And the solution, of course, is to let them go. There is really nothing particularly profound about it. But for fulfilling and lasting relationships, letting them go is a must. Refuse to carry around bitterness and you may be surprised at how much energy you have left for building bonds with those you love.
Dear lord we pray that we would forgive those around us. We pray that we won’t hold on to a grudge but that we will forgive. In Jesus’ name, Amen.
Posted by Ronald L Yahr, Jr at Saturday, June 18, 2011

Email ThisBlogThis!Share to TwitterShare to FacebookShare to Pinterest
Labels: forgiveness