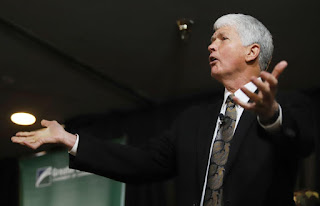 Luke 5:5-6 (ESV)
5 And Simon answered, “Master, we toiled all night and took nothing! But at your word I will let down the nets.” 6 And when they had done this, they enclosed a large number of fish, and their nets were breaking.

In his 18th year as an NFL coach, Les Steckel was given a second opportunity to coach in the Super Bowl.

As New England’s quarterbacks/receivers’ coach, Steckel watched helplessly as the Chicago defense stifled the Patriots offense en route to a lopsided 46-10 victory. But now as the offensive coordinator for the Tennessee Titans, he knew Super Bowl XXXIV against the St. Louis Rams promised to be a much tighter contest.

Early on, however, Steckel experienced a case of déjà vu as St. Louis built up a 16-0 lead. Tennessee fought back and eventually tied the game in the fourth quarter thanks to the backfield tandem of Steve McNair and Eddie George. But with less than two minutes remaining, the Rams reclaimed the lead after a 73-yard touchdown play from quarterback Kurt Warner to receiver Isaac Bruce.

On the ensuing drive, McNair methodically guided the Titans offense downfield. It all came down to one final play from the 10-yard line. With six seconds remaining and no timeouts, Steckel gave the signal—a quick slant pass to Kevin Dyson. McNair delivered the ball perfectly and Dyson’s sure hands reeled it in. For a moment, the receiver seemed destined for the end zone.

Then, Rams linebacker Mike Jones made a diving tackle that brought Dyson to the turf. Dyson attempted to stretch the ball across the goal line as time expired, but it was one yard short.

As his opponents celebrated the victory, Steckel felt the bitter sting of defeat and wondered if he could have done more to help Tennessee win. In that moment of quiet reflection, Steckel told CBN that he felt like God was speaking to him:

Steckel didn’t fully understand what that meant until three years later while coaching for the Buffalo Bills. After the entire staff was fired after the 2003 season, he prayerfully asked God for direction.

In that moment, Steckel was reminded of a prayer journal entry from the Super Bowl season in which he wrote that he would be in ministry five years later. These New Testament recorded words from Jesus came to his memory.

It was those words that concluded the story of how three fishermen became Jesus’ first disciples. For Steckel, it was the perfect analogy for what he was experiencing at this particular crossroad in his life. God was asking him to leave his profession of 30 years for something completely different. And falling one yard short of his Super Bowl dream revealed the greater purpose for his life. Within two years of retiring as an NFL coach, Steckel was serving as president for the Fellowship of Christian Athletes, a role he maintained until the end of 2016.

“At times, we may ask why God put us in a certain situation or why He allowed something to happen to us,” Steckel told CNS News. “But when we trust that God’s game plan is infinitely better than our own, we can’t lose. He makes all things work together for our good—that has certainly been true in my own life, even during the most disappointing losses.”

Dear Lord, help us to look at each circumstance we are in as a learning or training experience. Thank You for always using what we go through to make us better equipped to serve You. In the Name of Jesus, Amen.