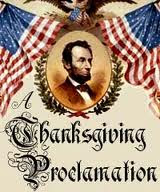 Psalm 28:6-8 (ESV)
6 Blessed be the Lord!
For he has heard the voice of my pleas for mercy.
7 The Lord is my strength and my shield;
in him my heart trusts, and I am helped;
my heart exults,
and with my song I give thanks to him.
8 The Lord is the strength of his people;
he is the saving refuge of his anointed.

The Civil War was at its height when President Lincoln declared Thanksgiving a national holiday. On October 3, 1863, amidst 50,000 fallen soldiers, destroyed battlegrounds, and an entire population at odds with each other.

Perhaps this year you are struggling to find something to be thankful for. Or maybe this season has always been difficult for you.

A brutal war had torn America apart when Thanksgiving was declared, just after the battle of Gettysburg had just been won. A battle that changed the course of American history, paving the way for freedom and democracy.

Has God ever called you to give thanks during a season of conflict and turmoil?

Dear Lord,  help us to practice gratitude in such seasons of our life no matter how bad things look. In the Name of Jesus, Amen.