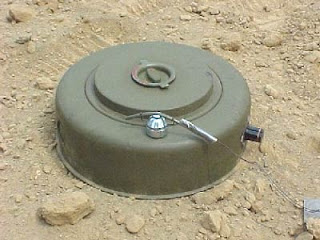 Matt 13:24-26 (New International Version)
"The kingdom of heaven is like a man who sowed good seed in his field. But while everyone was sleeping, his enemy came and sowed weeds among the wheat, and went away. When the wheat sprouted and formed heads, then the weeds also appeared."

Along the European coastal community after World War II, there is a warning about the dangers of picking up objects in the dunes. Although the dunes had been thoroughly combed for explosive devises, every once in a while you will hear horrible stories about children who picked up what they thought was a toy, only to trigger a deadly explosion. As a result, there were signs posted everywhere warning of the danger, planted by the enemy hand, that potentially lurked in the quiet dunes.

Even today, landmine damages still occurs, especially in countries such as Colombia, Iraq, Sudan, Somalia, Angola, India, Cambodia and many others, for a total of 117 countries in all! In fact between 1999 and 2010, more than 82,000 people have been killed or incapacitated by landmines!

The enemy is actively at work. Take, for example, the Khmer Rouge. In the mid-70s they took children as young as five and trained them to camouflage and set landmines in Cambodia.

The only purpose of these landmines is to bring devastation and discouragement among the people of certain countries. Not only do they kill and maim civilians and soldiers alike, they also cripple the livelihood of many farmers who can't earn income due to the fact that their fields have been mined.

We need to remember that the evil one is exactly the same. His purpose for our lives is "to steal and kill and destroy" (John 10:10), or in other words, to completely discourage us. He, too, has laid landmines, not in fields or lakes, but in the very core of the church itself.
What better way to discourage Christians than to sow seeds of discord among them! Some of these seeds specialize in promoting salvation by works, which will only lead to total disheartenment because we will never truly measure up. Others specialize in criticism or in Luke warmness, and other tools of discouragement. As a result, it is often our fellow-churchgoers who lead us to believe that we cannot be forgiven. If believers cannot encourage one another, what good is religion?

What we tend to forget, however, is that Christianity is not about religion. Instead, it's about us being in a relationship with our Maker and Savior! Jesus is the One who came to earth to save us, not the other way around. He is the One who paid the price so that we could experience real life, forgiveness and eternity with Him!

Sooner or later someone will notice: "Sir, didn't you sow good seed in your field? Where then did the weeds come from?" (Matt 13:27 NIV)

Discouragement never comes from God, for our God is a God of love and encouragement: "You hear, O Lord, the desire of the afflicted; you encourage them, and you listen to their cry …" (Ps 10:17 NIV)

Naturally when we find out that the enemy is the source of strife among us, we will wonder: "Do you want us to go and pull them up?" (Matt 13:28 NIV)

God's answer though is clear: "'No,' he answered, 'because while you are pulling the weeds, you may root up the wheat with them. Let both grow together until the harvest. At that time I will tell the harvesters: First collect the weeds and tie them in bundles to be burned; then gather the wheat and bring it into my barn.'" (Matt 13:29-30 NIV)

It's not for us to discern who is a child of God and who is not. This is not our worry. God will deal with these "weeds" among us. We are to shine like Jesus did, we are to love anyone around us, without exception, just like Jesus did: "Love one another. As I have loved you, so you must love one another." (John 13:34 NIV)