Are You a Clubhouse Christian? 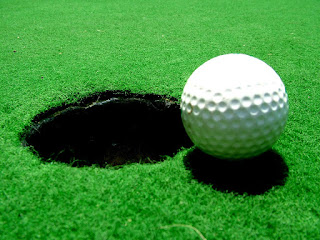 Luke 10:38-42 (New International Version)
38 As Jesus and his disciples were on their way, he came to a village where a woman named Martha opened her home to him. 39 She had a sister called Mary, who sat at the Lord’s feet listening to what he said. 40 But Martha was distracted by all the preparations that had to be made. She came to him and asked, “Lord, don’t you care that my sister has left me to do the work by myself? Tell her to help me!” 41 “Martha, Martha,” the Lord answered, “you are worried and upset about many things, 42 but few things are needed—or indeed only one. Mary has chosen what is better, and it will not be taken away from her.”

Did you know there are people out there who call themselves golf historians? It's amazing. They can talk circles around you or me when it comes to golf. If you bump into a golf historian or find yourself golfing with one for a round, you may discover fascinating things about this game. You may also feel like smacking the historian with a putter.

There was a man who knew absolutely everything there was to know about golf. He liked to amaze and impress those around him with obscure matters of trivia.

"Did you know that Sandra Day O'Connor is the only U.S. Supreme Court justice to have scored a hole-in-one?" He would ask.

He knew precisely where to stand when someone else was putting out or teeing off.

He knew to bring a towel to the green to clean his properly marked ball.

The trouble was he couldn't golf worth a hill of beans. His putts were short and crooked. So were his drives. Except when he missed the ball altogether.

Though his etiquette did not allow him to get upset with himself, he really should have. Most people that golfed like that would have the common decency to throw my clubs in the creek and quit the game. But not him. Sure, he would frown after sinking that all important sixth putt, he would shake his head after shanking his fourth approach shot, but there was little emotion. He would rather talk about those who play the game well than do so himself.

He's the guy who looks great in the clubhouse. He's the armchair golfer. Oh, he does well at computer golf. Hook him up to a mouse and he can hold his own. Hand him a joystick and he can beat you hands-down. But take him onto the golf course where it matters and he's lost. Hand him a club and stand back.

Maybe you know a person that knows much about God. If they'd have held a tournament for Bible trivia games he would have won the grand slam. He could quote Scripture. Recite all four stanzas of a hundred hymns. But there was one small problem. He didn't know the One he was singing about. Though he was privileged to grow up in a home where his parents taught and lived the Bible, it hadn't taken hold of him.

He used to have "sword drills" in Sunday School. Where he held a Bible over his heads like the Sword of Damocles. When the teacher yelled out a Bible verse, he would frantically flip the pages until some winner found it. Guess who usually won? That's right. He was proud of how many verses he could find about the sin of pride. He looked down on those who couldn't locate verses about the Pharisees.

One day he encountered a story in the Bible that confused him. It was of Mary and Martha, two friends of the Master. One day she invited Jesus and His disciples into her home for a meal. Imagine feeding 13 grown men. But to make matters worse, Martha's sister, Mary, didn't even help out with the roast. As Martha sliced potatoes, Mary sat at Jesus' feet, listening and learning. Finally, Martha had had enough.

"Lord," she complained, "doesn't it seem unfair to you that my sister just sits here while I do all the work? Tell her to come and help me."

It was then that it hit him like someone yelling "Fore!" Martha was consumed by the temporary, while Mary was hungry and thirsty for the eternal. Like me, Martha was missing the essential ingredient to a living and vibrant faith: the desire to sit at Jesus' feet.

Many of us have probably spent years living exactly like the golf historian, talking about the Master without really knowing Him. Jesus' words to the Pharisees were directed to me: "These people honor me with their lips, but their hearts are far away" (Matthew 15:8).

I want to know Christ, to walk in His presence, to learn from him. In knowing the Master I have come to the stunning realization that He knows us and loves us too. Let’s make it each of our goal today to really know the Master.

Dear Lord we thank You that we can have a personal relationship with You. Help us take the time to sit at your feet today. In Jesus’ name, Amen.