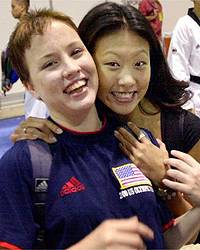 2 Corinthians 9:6-8 (New International Version)
6 Remember this: Whoever sows sparingly will also reap sparingly, and whoever sows generously will also reap generously. 7 Each of you should give what you have decided in your heart to give, not reluctantly or under compulsion, for God loves a cheerful giver. 8 And God is able to bless you abundantly, so that in all things at all times, having all that you need, you will abound in every good work.

Kay Poe and Esther Kim have been best friends since they were seven years old. Among other things they have in common, the two young ladies from Houston both compete at the highest levels in taekwondo. How good are they? Esther and Kay advanced to the finals in the Women's Olympic Flyweight division at the 2000 U.S. Olympic Team Trials on May 20 in Colorado Springs.

"I don't think of her as just a friend. I think of her more as a sister," Kay says. "We've grown up together, and we always push each other and help each other out the best we can training wise." What a story was unfolding! Reporters and photographers were poised to record the outcome of so intense a competition between two girls who have been close for so long. But a sports story would soon be overshadowed by a far more important friendship story.

Kay had dislocated her left kneecap in her semi-final match of the round robin tournament. Though ranked number one in the world at her sport, it was questionable that she could compete against her best friend. She could barely stand, so it was a foregone conclusion that Esther would win, travel to the 2000 Olympic Games in Sydney, and represent the United States in the international competition these two had trained and worked toward for so long.

On the day of the match, Esther Kim shocked the crowd by forfeiting rather than defeat her friend in an unfair competition. In allowing the better taekwondo fighter to represent the United States in Sydney, she won a personal battle over ego and selfishness. Amidst frequent stories of cheating and taking unfair advantage in order to win at any price, Esther showed how to win by losing.

"Even though I didn't have the gold medal around me," said Esther, "for the first time in my life, I felt like a real champion." Her generosity of spirit was honored with the Citizenship Through Sports Award and with an all-expenses-paid trip to the 2000 Olympic Games from the International Olympic Committee.

In the Bible, Paul wrote about giving up certain "rights" for the sake of people he loved (see 1 Corinthians 9:1-15). Parents do it all the time for their children. And occasionally friends make huge gestures like Esther's.

The next time you are inclined to give in to the selfishness of the masses, recall this story of a twenty-year-old athlete's largess. The next time you have the chance to show generosity, let it inspire you to rise to the level of her example.

Dear Lord we pray today that we would look for ways that we can show your love to those around us even if it means giving up something ourselves. In Jesus’ name, Amen.