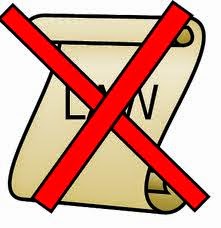 Romans 13:1-2 (NIV)
1 Let everyone be subject to the governing authorities, for there is no authority except that which God has established. The authorities that exist have been established by God.
2 Consequently, whoever rebels against the authority is rebelling against what God has instituted, and those who do so will bring judgment on themselves.

"Hey, Frank! Did you hear the latest news? All civil and government agencies have been shut down. Our government has decided that from now on people have the right to be completely free from any laws that our country has passed. We won't be voting for political parties any longer, as there won't be any, and we won't have to pay taxes!"

"Wow, Henry! I wonder how this will turn out!"

"I don't know, but lawyers, teachers and police men are facing some rough times. They have all lost their jobs!"

"That doesn't sound good at all! I better go straight home-just as soon as I find a gas station!"

Five minutes later Frank pulls into the nearest gas station. His jaw drops open in shock as his eyes scan the sign advertising the price. "What . . . ? Gas has jumped from $3.00 a gallon to $200.00? What a rip off!"

"Calm down mister," calls out the attendant. "I have to make a living, you know, so I have decided that from now on I will have a fixed gas price! Nobody's going to dictate to me how much I can charge for my gas! If you don't like my prices, there are other gas stations!" He chuckles wildly. "Just be aware that they seem to be after a much bigger profit than I am!"

As Frank arrives home, he is shocked to see a total stranger dragging his eight-year old son out of the house. His son is screaming at the top of his lungs, and Frank immediately tries to intervene: "Hey! What are you doing with my child?"

"Your child? This ain't YOUR child!" Roars the stranger.

"Just ask my son and he will tell you!" Frank cries. "And this is my house, too!"

"Kids lie! I decided about 15 minutes ago that this would be my child, so now he's mine! He just ain't learned it yet!"

"All my life I've dreamed of having a child. Now I have one, and you can't do anything to stop me!"

"By the way, I'd say you would better spend your time getting ready for the drug crowd than trying to take MY child."

"Drug crowd??? What are you talking about?"

The stranger laughs wickedly. "If this is really 'YOUR' home, then there are about 100 teenagers in there claiming that it is 'THEIR' home. And the whole lot of them is pretty high, if you know what I mean."

"Go ahead! There is no more police, remember? We are free to do as we want from now on!" Then the sordid stranger turns his attention to someone else: "Hey, Bob! Wait for me! I need to take my new kid home!"

As Frank turns around, another total stranger drives off with his car and his cell phone, which he stupidly left charging on the front seat. Not knowing what to do, he begins to run down the street, heading for the nearest pay phone. Fingers shaking over the number pad, he dials the first number that comes to his mind.

"Oh, hi Frank. I'm so glad that you called. I needed to tell you about your new salary, effective today. I need to make a living too, you know, so I have decided that your annual income from now on will be $50.00."

The next few weeks are a living nightmare. Frank finds out that all his savings are gone. It seems the bank manager has decided to close down all of his banks and live on the deposits of his former customers. When Frank finally finds his wife, she has been abducted and abused. Everywhere he looks there is chaos. All laws have been abolished; there are no leaders in the country, and no law enforcement officers. It seems that all of these things have become "old fashioned", and the result is utter mayhem. Is there any hope for the future?

Would you like to live in a country like Frank's, where people are completely free to do as they wish?

Is it really worthwhile to criticize authorities, when in all reality, we wouldn't be able to do any better?

"Remind the people to be subject to rulers and authorities, to be obedient, to be ready to do whatever is good, to slander no one, to be peaceable and considerate, and to show true humility toward all men." (Titus 3:1-2 NIV)

This message is not meant to approve tyrannical governments who rule with an iron fist. They will have to face God's judgment seat one day. Still, respecting authorities, no matter how bad they are, can be a true witness to those who don't know God. Remember, when Paul wrote the above letter to Titus, he was in prison in Rome, under Roman authority. Paul realized that even a Roman prison was better than a lawless society!

Dear Lord, thank You for the leaders that lead us even if we don’t always agree with them. Help us to pray daily for them that they will look to you for the wisdom and guidance that they need. In Jesus’ Name, Amen.
Posted by Ronald L Yahr, Jr at Monday, July 21, 2014