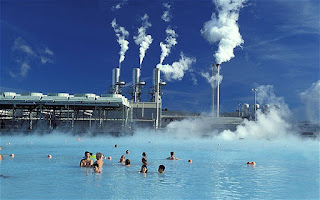 1 Timothy 6:12 (NIV)
Fight the good fight of the faith. Take hold of the eternal life to which you were called when you made your good confession in the presence of many witnesses.

When the first permanent settlers to Iceland initially arrived in the area now known as Reykjavik, they must have been quite surprised. Remember in 874, cigarettes didn't even exist until centuries later! They must have wondered if they had reached the doors of hell. Smoke and water vapors poured forth from the ground, the hillsides, everywhere, to the point that it even looked like the bay was smoking. It made the surroundings surreal as well as unique. Their name for the region? Reykjavik: Smoky Bay.

They must have been quite determined to build their houses in a place where smoke and steamy vapors poured forth from everywhere. It was only later that they would discover the advantages of that smoke. It came from the many geo-thermal areas in the region, and this made many of the hot springs ideal for bathing and washing, even in the middle of the winter! They must have been the cleanest Europeans of their time!

Much later, someone wondered if the region was rich in gold, and they bore a hole. What did they find? Only more smoke. What use could they make of all that steam?

It was early in the 1920s when the Icelanders first conducted that mysterious smoke that came up from the ground to their homes, providing themselves with an abundant source of free heat.

It sure was a huge success, and in our day and age, the island is primarily powered by geo-thermal energy. In fact electricity is the cheapest commodity in this country! No worries about leaving the windows wide open during the winter! Energy really is that inexpensive over there! If the early settlers to Iceland had been scared away from the "smoke" of Smoky Bay in 874, we might never have discovered geothermal energy!

The same is true with salvation. As humans, our tendency is to try to work out our salvation. In days of old, human sacrifices were used to appease the angry gods. Now we've discovered that the Creator is our true God, but we still tend to try to use our own good works to obtain salvation. Just like the Icelanders were on the wrong track when they bore holes for gold, we are also missing the point.

And just like these early Icelanders began to enjoy and use their abundant steam, we need to start taking advantage of the fellowship God has granted us. We need to start discovering what He has to say about salvation! Isn't that why Jesus came here in the first place?

Only then can the real discoveries be made, and we will discover first that "You who are trying to be justified by law have been alienated from Christ; you have fallen away from grace." Gal 5:4

If our good deeds cannot obtain us salvation, how will we ever reach Heaven? Simple enough: "For it is by grace you have been saved, through faith - and this not from yourselves, it is the gift of God-not by works, so that no one can boast." Eph 2:8-9

The Icelanders discovered the grace bestowed on them. Smoke and steam were beneficial to them, a life-saving commodity amidst the harsh elements of their land. We, too, can discover grace that is way bigger than Icelandic smoke: A grace that will knock our shoes out from under our feet, a grace that will revitalize our whole being, a grace that comes from God, a grace that promises Salvation, Salvation from God, not humans.

And just like the Icelanders and the myriad of tourists who visit the island country can relax in the steamy geothermal waters, we, too, can rest in God's grace! Why not join me and find out for yourselves?

Dear Lord, thank You that we can completely rest in You. Help us share that great news with those You bring into our love today. In Jesus’ Name. Amen.
Posted by Ronald L Yahr, Jr at Tuesday, June 09, 2015