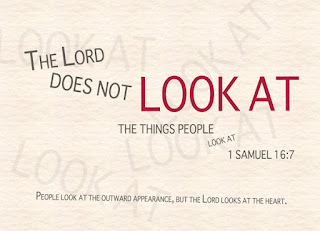 When Samuel was called by God to anoint Israel's next king, he was sure that God's choice would be Jesse's first son Eliab -- but he wasn't exactly what the Lord had in mind. God chose the least likely of Jesse's sons, David, because he was a man after His own heart! While the world looks carefully on outward appearance, God is carefully examining the heart!

When making decisions, we need to be sure to have the heart of God in the matter -- not our own reasoning, researching and weighing of circumstances. Are you facing a big decision today? What may seem like the perfect opportunity to us and the world around us may not necessarily be God's choice! Let's spend some time praying and seeking the Lord!

Dear Lord, as we face each decision today help us to seek after You will for the choice we make. In the Name of Jesus, Amen.
Posted by Ronald L Yahr, Jr at Monday, February 13, 2017