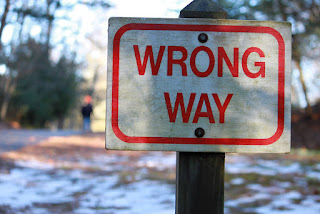 1 Corinthians 9:24-27 (ESV)
24 Do you not know that in a race all the runners run, but only one receives the prize? So run that you may obtain it. 25 Every athlete exercises self-control in all things. They do it to receive a perishable wreath, but we an imperishable. 26 So I do not run aimlessly; I do not box as one beating the air. 27 But I discipline my body and keep it under control, lest after preaching to others I myself should be disqualified.

During the 1990's in an NCAA Division II national championship cross-country race in California, a bizarre twist of events took place. Mike Delcavo and 127 of the best runners in the country were battling for glory over the 10,000 meter course. About three miles into the race, Delvaco was somewhere in the middle of the pack, when he realized that the runners had made a wrong turn. So he yelled out, "You're going the wrong way," but they didn't listen. Only 4 others followed Mike when he turned in the right direction...and suddenly, he found himself in the lead.

However that lasted only about a mile, since Mike and the runners who followed him soon reunited with the larger pack who, having gone the wrong way, actually shaved about a half a mile off the course, and were now in the lead again. The final blow came when, because so many of the runners had gone the wrong way, the officials changed the official course route to accommodate their error. So when Mike Delcavo finally crossed the finish line, he was number 103 overall.

At the end of the race, some of Delcavo's competitors "thought it was funny that he went the right way."

In our mixed up world, when everybody is wrong, then wrong becomes right. However, in the world to come there is only one Judge and He will not change the correct course regardless of how many or how few actually run it. His rewards will be based on our having stayed the true course.

It's easy to follow the crowd. But it takes courage and conviction to follow wholeheartedly after God. Sometimes it can get lonely running your race, wondering where the crowd is going, and even whether you, yourself are on the right road. But my friend, keep running with the Lord. And when the race is over and you have finished your course, may the He say to you, "Well done, thou good and faithful servant!"

Dear Lord, give us the courage and strength to run the race in the correct way following the path that You have for us. In the Name of Jesus, Amen.
Posted by Ronald L Yahr, Jr at Tuesday, June 06, 2017