What to do when people give you a hard time 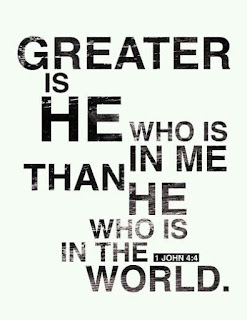 1 John 4:4 (ESV)
Little children, you are from God and have overcome them, for he who is in you is greater than he who is in the world.

Here’s a few suggestions to use when people give you a hard time.

1. Realize you’re not alone. Since the beginning of time Christians have been given a hard time. Paul experienced hard times too as a Christian. Check out his experiences in Acts 9:29 – “And he spoke boldly in the name of the Lord Jesus and disputed against the Hellenists, but they attempted to kill him.” Acts 9:29
People were giving Paul a hard time because He was a Christian, in fact they tried to kill him for it.

2. Don’t shut up! Don’t let what people say or do to because of your faith cause you to shut up. It’s easy to want to stay quiet because someone has given you a hard time however, don’t allow yourself to give in to fear and want to be quiet because of your faith. Keep sharing what you believe with others. They will respect you in the end. Here’s what Peter and John said when people told them to stop telling people about Jesus. “As for us, we cannot help speaking about what we have seen and heard.” Acts 4:20

3. Show respect. Don’t jump into an arguing match and start cussing someone out because they don’t believe what you do. Be respectful to people and pray for them to have their eyes opened to the goodness of God. Here’s a good Bible prayer you can pray for them in your prayer times:
“Asking God, the glorious Father of our Lord Jesus Christ, to give you spiritual wisdom and insight so that you might grow in your knowledge of God.” Ephesians 1:17

Realize that sometimes people will give you a hard time because of what you believe. Don’t let that stop you or shut you up. God has called you to preach the gospel to those you know.

Dear Lord, give us the strength and endurance to speak up for You when the world comes against us. In the Name of Jesus, Amen.
Posted by Ronald L Yahr, Jr at Sunday, January 14, 2018