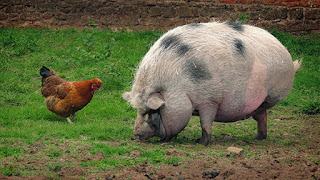 2 Corinthians 5:14-15 (ESV)
14 For the love of Christ controls us, because we have concluded this: that one has died for all, therefore all have died; 15 and he died for all, that those who live might no longer live for themselves but for him who for their sake died and was raised.

You've heard the story about how bacon and eggs for breakfast shows the difference between involvement and commitment--a chicken is involved, but a pig is committed.

That sums up most of us at church. There are folks who are merely involved. They make nominal contributions, but when called upon to make a true sacrifice they decline.

Then there are those few who are sincerely committed. They come not to be served but to serve. They give of their time, money, energy, and talents. They sacrifice and don't complain about making sacrifices. They don't wait to be asked. They take initiative. They find needs and meet those needs. They are the first to show up and the last to leave. Their name is at the top of most volunteer lists.

They are servants. They have acquired this servant mentality from their Lord, who was the ultimate example of what it means to be a servant. Inspired by their Savior who laid down His life for them, they lay down their lives for their brethren.

Dear Lord, make us a servant, just like You who came to Earth to serve. In the Name of Jesus, Amen.