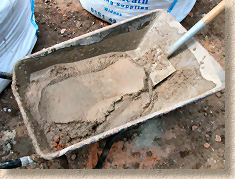 Romans 1:20  (ESV)
For his invisible attributes, namely, his eternal power and divine nature, have been clearly perceived, ever since the creation of the world, in the things that have been made. So they are without excuse.

Have you ever seen workers build a brick building? They don’t just stack the bricks on top of each other. They need some sort of glue to hold all those bricks together. The glue for bricks is called mortar.

In the same way, your body is made up of 37.2 trillion little bricks called cells. And like a building, those cells need some sort of glue to hold them all together. The glue for cells is called laminin.

Laminin holds your body together.Why is that important? Because it’s another reminder that we are God’s own creation. You see, God left His fingerprints all throughout His creation. The Bible tells us that even though we can’t see the invisible qualities of God—like His awesome power and His holiness—we can see His creation and know He is real. Jesus was with God at creation, and “in him all things were created: things in heaven and on earth, visible and invisible. . . . In him all things hold together”.

Laminin is a picture of what Jesus tells us in His Word—He is the glue that holds our bodies, our souls, and everything—together. So when you’re feeling overwhelmed and having the absolute worst day ever, think about laminin—and remember that Jesus holds you—and all things—together.

Dear Lord, when we start to worry about all the things happening in our life and around us, help us to stop and remember You are Lord of all—and You hold everything, together including us. In the Name of Jesus, Amen.

Email ThisBlogThis!Share to TwitterShare to FacebookShare to Pinterest
Labels: building blocks, hold it together, laminin