Thank you all that gave for our freedom. 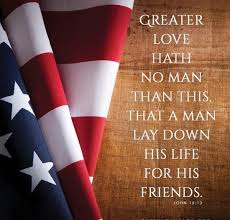 John 15:13 (ESV)
Greater love has no one than this, that someone lay down his life for his friends.

Imagine taking a walk from New York City to Chicago. That’s about an 800-mile trek, and it would take about two weeks of non-stop walking to complete it – a lot longer if you stopped to rest.

Now, imagine that all throughout your walk there were a continuous line of people standing shoulder to shoulder, one after another through the streets of New York City, into the back roads of New Jersey, over each rolling hill in Pennsylvania – people as far as the eye can see. It continues through Ohio and Indiana into Illinois. Finally, you arrive in Chicago after having walked past 1,321,612 people.

That’s a LOT of people. It also happens to be the same number of people who have died in combat while serving this country.

It’s sobering to think of all those faces. Each face has a story – a soldier whose life was cut down in its prime and likely left behind a spouse or a child or both. Most (625,000) died during the bloody, gruesome close quarter combat of the Civil War. Another 405,399 died in World War II, and 116,516 died in World War I. There have been many different wars, and they’ve stretched across many different eras, but one thing has remained constant: The amazing courage and willingness of the American soldier to lay down his or her own life for the cause of liberty.

It’s hard to put into words just how incredible a sacrifice that is. Jesus said there is no greater love than to lay down one’s life for one’s friends. Think about that for a second – no greater love. If you have lost a loved one in battle, you can rest a little easier knowing the life was not lost in vain. They may have left it all on the battle field, but these men and women have given the greatest gift a human can possibly give – their life – so we may live.

From the tattered, starving patriots who met their end battling the British during the American Revolution to the highly trained modern day soldiers who succumbed to barbaric terrorists in the Middle East, each and every fallen American soldier will forever share this incredible distinction and hold a special place of honor among all people who have benefited from their service.

Today ion this Memorial Day let’s honor the fallen with hearts of gratitude and a spirit of awe, for they gave us the gift to which there is none greater. There’s no possible way to repay them or their families – but each and every one of us can do the next best thing: Dedicate our lives, fortunes, and sacred honor to preserving the freedom so many died to keep alive.