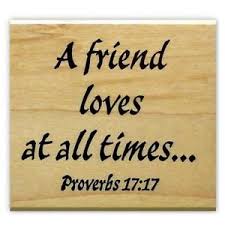 
A friend loves at all times,


and a brother is born for adversity.

I Always try to be conscious of thanking those that served in the military. I recall one time as I thanked a gentleman for his service, he thanked me politely and then looked down for a few seconds. When he looked up again he said, “I miss the friendships…What I miss most is the friendships.” Then he walked away. I spent the next few minutes thinking about those friendships built between this man and his brothers in arms as they faced all kinds of adversity.

We need a friend who will stick by us during times of stress and trouble. That person becomes more than just a friend, they become a brother…a sister.

Can you picture the disciples sprinting away from Gethsemane in the moments after the soldiers began tying Jesus up? Can you see the desperate glances thrown back over their shoulders? The adversity has hit them hard, but they are certainly not acting like they are Jesus’ brothers.

It’s sad to consider how little adversity it can sometimes take for us to stop being someone’s friend. Maybe there was someone you used to hang out with in grade school, someone who was like a brother or sister to you. Lots of memories from sleepovers or camping trips. Then you got to high school, and other people decided that friend of yours was weird. Nerdy. Someone to be AVOIDED or MOCKED. You saw it happen. You saw the abuse they were taking. Rather than drawing close to them during their trouble, did you run away instead?

Jesus didn’t give up on the disciples as he was led away to the cross that night. He doesn’t give up on us bad friends either. In fact, his entire existence on earth was to prevent our ruin. He refused to leave us, even when it cost him dearly. He continues to stick closer than a friend or brother. Look at yourselves through Jesus’ eyes. You were the perfect candidates to be ignored and avoided. Yet Jesus still seeks a closer relationship with us and never leaves us.

As I think about the people in my life that God has graciously placed around me, I think about sitting on a dorm room bed and talking with some of them about guilt, about family struggles, about worries for the future. I think about them sticking up for me, even when they would have been better off sprinting away, casting desperate glances over their shoulders. I am grateful for friends who are closer to me than brothers and sisters, and I am well aware that I don’t deserve them. I pray that God allows me to be the kind of friend who supports people on the battlefield that is this entire life.

Dear Lord, only You can teach us how to be a truly good friend. Give us the love and courage to support others, even when it will cost us something. In the Name of Jesus, Amen.

Email ThisBlogThis!Share to TwitterShare to FacebookShare to Pinterest
Labels: A friend loves