When waves crash around us

This is a posting that can be found on Ron's Reflections ( He has a good name) Ron has been a pastor since 1989 serving churches in Mississippi and Alabama. I was really touched by it. May God use it to help you face the tough times.


A number of years ago I was having a tough time. My youngest son was critically ill… I was trying to complete my doctorate… and the pressure at church was immense. At the time I was also dealing with some anger and resentment issues that hadn’t been resolved from 25 years earlier. Even though I was a pastor, I felt like I waves of despair were crashing all around me. 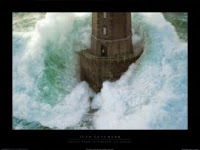 One day I went to the local Christian book store. Upon walking in I saw a picture on the wall and was immediately struck by it. What I saw was exactly how I felt. If you look closely at the picture to the right, you will notice a man standing in the door as the wave engulfs the lighthouse.

I pictured myself as that person… about to be hit hard by a wave he should have know was coming. Obviously if he didn’t do something quick he could be washed away.
Then I saw something else about the picture… something encouraging.
The man must not have been worried about the storm. Probably because he’d been through them before. And because of his past experience he had to have known that the lighthouse was secure and wouldn’t be affected by the waves. He knew the foundation of the lighthouse was trustworthy. So he could open the door… step out into the storm… and still be safe.

Luke 6:47 Everyone who comes to me and hears my words and does them, I will show you what he is like: 48 he is like a man building a house, who dug deep and laid the foundation on the rock. And when a flood arose, the stream broke against that house and could not shake it, because it had been well built. 49 But the one who hears and does not do them is like a man who built a house on the ground without a foundation. When the stream broke against it, immediately it fell, and the ruin of that house was great.

God used a picture to encourage me. He reminded me that He is my foundation and that no matter what may come into my life, I was secure and had no need to worry. Regardless of how harsh the storm, He was Lord of the storm!

He promised never to leave or forsake me. I could cast all my anxiety upon Him because He cared for me. He would not put more on me than I could handle. His grace was sufficient for when I am weak, then I am strong.
The same is true for you when Jesus is your Savior.
Posted by Ronald L Yahr, Jr at Wednesday, August 19, 2009