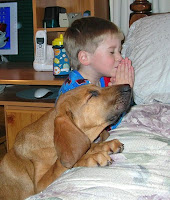 I got this in an email today and thought it was really good especially when you take a look around the world and see the many people and families that are suffering in one way or another. Lets always remember to not only pray but to listen also to what God is saying to us.

There once was a man who had nothing for his family to eat. He had an old rifle and three bullets. So, he decided that he would go out hunting and kill some wild game for dinner. As he went down the road, he saw a rabbit. He shot at the rabbit and missed it.
The rabbit ran away. Then he saw a squirrel and fired a shot at the squirrel and missed it.
The squirrel disappeared into a hole in a cottonwood tree..
As he went further, he saw a large wild 'Tom' turkey in the tree, but he had only one bullet remaining.
A voice spoke to him and said, 'Pray first, aim high and stay focused. However, at the same time, he saw a deer which was a better kill. He brought the gun down and aimed at the deer. But, then he saw a rattlesnake between his legs about to bite him, so he naturally brought the gun down further to shoot the rattlesnake. Still, the voice said again to him, 'I said 'Pray, Aim high and Stay focused.'
So, the man decided to listen to God's voice.
He prayed, then aimed the gun high up in the tree and shot the wild turkey. The bullet bounced off the turkey and killed the deer. The handle fell off the gun and hit the snake in the head and killed it. And, when the gun had gone off, it knocked him into a pond. When he stood up to look around, he had fish in all his pockets, a dead deer and a turkey to eat for his family.
The snake (Satan) was dead simply because the man listened to God.
Moral of the story:
Pray first before you do anything, aim and shoot high in your goals, and stay focused on God. Never let others discourage you concerning your past. The past is exactly that, 'the past.' Live every day one day at a time and remember that only God knows our future and that he will not put you through any more than you can bear.
Do not look to man for your blessings, but look to the doors that only He has prepared in advance for you in your favor.

Do not be anxious about anything, but in everything, by prayer and petition, with thanksgiving, present your requests to God.
-Philippians 4:6

Dear Lord as we pray help our ears be open to what you are saying to us. We pray that we would have the faith to foloow what you tell to do. In Jesus name, Amen.