Does your pride keep you from reflecting? 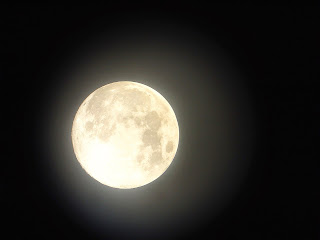 Galatians 6:3 (NIV)
If anyone thinks they are something when they are not, they deceive themselves.

I received this in an email and thought it was great. It made me really think, I hope it does the same for you.

For thousands of years, the relationship had been perfect. As far back as anyone could remember, the moon had faithfully reflected the sun's rays into the dark night. It was the greatest duo in the universe. Other stars and planets marveled at the reliability of the team. Generation after generation of earthlings were captivated by the reflection. The moon became the symbol of romance, high hopes, and even nursery rhymes.

"Shine on, harvest moon," the people would sing. And he did. Well, in a way he did. You see, the moon didn't actually shine. He reflected. He took the light given to him by the sun and redirected it toward the earth. A simple task of receiving illumination and sharing it.

You would think such a combo would last forever. It almost did. But one day, a nearby star planted a thought in the moon's core.

"It must be tough being a moon," the star suggested.

"What do you mean? I love it! I've got an important job to do. When it gets dark, people look to me for help. And I look to the sun. He gives me what I need and I give the people what they need. People depend on me to light up their world. And I depend on the sun."

"So, you and the sun must be pretty tight."

"Tight? Why, we are like Huntley and Brinkley, Hope and Crosby, Benny and Day. . ."

"Yeah, you've been playing second fiddle for too long. You need to step out on your own."

"I mean stop reflecting and start generating. Do your own thing. Be your own boss. Get people to see you for who you really are.'

"Well, you are, uh, well, uh, well, that's what you need to find out. You need to find out who you are." The moon paused and thought for a moment. What the star said made sense. Though he had never considered it, the moon was suddenly aware of all the inequities of the relationship.

"You are right!" Asserted the moon. "It's high time we had a solar-lunar equity up here.'

He set out on the course of self-enhancement. After all, his complexion was a disgrace, so full of craters and all. His wardrobe was sadly limited to three sizes; full length, half-cast, and quarter-clad. And his coloring was an anemic yellow.

So, girded with determination, he set out to reach for the moon.

He ordered glacier packs for his complexion. He changed his appearance to include new shapes such as triangular and square. And for coloring he opted for a punk-rock orange. "No one is going to call me cheese­face anymore."

The new moon was slimmed down and shaped up. His surface was as smooth as a baby's bottom. Everything was fine for a while.

Initially, his new look left him basking in his own moonlight. Passing meteors would pause and visit. Dis­tant stars would call and compliment. Fellow moons would invite him over to their orbits to watch "As the World Turns."

He had friends. He had fame. He didn't need the sun-until the trends changed. Suddenly "punk" was out and "prep" was in. The compliments stopped and the giggles began as the moon was slow to realize that he was out of style. Just as he finally caught on and had his orange changed to pinstripe, the style went to "country."

It was the painful poking of the rhinestones into his surface that caused him to finally ask himself, "What's this all for anyway? You're on the cover of the magazine one day and forgotten the next. Living off the praise of others is an erratic diet."

For the first time since he'd begun his campaign to find himself, the moon thought of the sun. He remembered the good ol' millenniums when praise was not a concern. What people thought of him was immaterial since he wasn't in the business of getting people to look at himself. Any praise that came his way was quickly passed on to the boss. The sun's plan was beginning to dawn on the moon. "He may have been doing me a favor."

He looked down upon the earth. The earthlings had been getting quite a show. They never knew what to expect: first punk, then preppie, now country. Odds­makers in Las Vegas were making bets as to whether the next style would be chic or macho. Rather than be the light of their world he was the butt of their jokes.

Even the cow refused to jump over him.

But it was the cold that bothered him the most. Absence from the sunlight left him with a persistent chill. No warmth. No glow. His full length overcoat didn't help. It couldn't help; the shiver was from the inside, an icy shiver from deep within his core that left him feeling cold and alone.

Which is exactly what he was.

One night as he looked down upon the people walking in the dark, he was struck by the futility of it all. He thought of the sun. He gave me everything I needed. I served a purpose. I was warm. I was content. I was ... I was what I was made to be.

Suddenly, he felt the old familiar warmth. He turned and there was the sun. The sun had never moved. "I'm glad you're back," the sun said. "Let's get back to work."

"You bet!" Agreed the moon.

And to this day whenever the sun shines and the moon reflects and the darkness is illuminated, the moon doesn't complain or get jealous. He does what he was intended to do all along. The moon beams.

When God Whispers Your Name will you let Him shine through YOU?

Dear Lord, we want to shine Your love today. Help us be content with what You made is do. Help our prideful ways not get in the way. In Jesus’ Name, Amen.
Posted by Ronald L Yahr, Jr at Tuesday, May 19, 2015