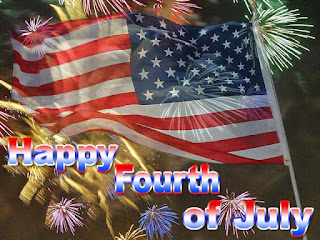 If my people, who are called by my name, will humble themselves and pray and seek my face and turn from their wicked ways, then will I hear from heaven and will forgive their sin and will heal their land.

Do you know your fourth of July history? In the United States, Independence Day, commonly known as the Fourth of July, is a federal holiday commemorating the adoption of the Declaration of Independence on July 4, 1776, declaring independence from the Kingdom of Great Britain.


During the American Revolution, the legal separation of the American colonies from Great Britain occurred on July 2, 1776, when the Second Continental Congress voted to approve a resolution of independence that had been proposed in June by Richard Henry Lee of Virginia.


After voting for independence, Congress turned its attention to the Declaration of Independence, a statement explaining this decision, which had been prepared by a Committee of Five, with Thomas Jefferson as its principal author. Congress debated and revised the Declaration, finally approving it on July 4.


On this 4th of July some 234 years later we need to turn our hearts even more to God and ask Him to forgive our land and to heal it. That we may become once again what the founding fathers set forth to accomplish.

This is a prayer that was delivered before the congress by Rev. Frederick Brown Harris, Chaplain, US Senate in 1943.


Our fathers' God and ours, on the birthday of national independence we confess our dependence upon Thee. Without Thee we are lost in spite of the overwhelming might of our national arms.
We thank Thee for those pilgrims of faith who came hither in their frail barque across mountainous seas and who stepped upon strange shores with the salutation to a new world, "In the Name of God. Amen." The Nation here established, conceived in liberty and dedicated to the proposition that all men are created equal has acknowledged that Name above every name and reverenced it, has built its altars, reared its temples, and raised its steeples, emblems of a faith that points to the skies and wings its sure and certain way to God. Make that faith of the fathers, we pray, real to us in these tempestuous days. Save us from a freedom of speech so empty that we have nothing worth saying, from a freedom of worship so futile that we have no God to adore, from freedom from want and fear with no creative idea as to how to use our plenty or our security for the redemption of our social order and for the salvation of our own souls. Let all that is low and unworthy in us sink to the depths. Let all that is high and fine in us rise to greet the morn of a new day confident that the best is yet to be. Amen. (Source: Congressional Record-Senate, 78th Congress, first session, 89/5, July 5, 1943, 7160.)
Rev. Frederick Brown Harris, Chaplain, US Senate

Dear Lord, We pray that our country would turn it's heart back to You. We pray for our leaders that they would call upon Your Name.  IN Jesus' Name, Amen.

Email ThisBlogThis!Share to TwitterShare to FacebookShare to Pinterest
Labels: 4th of July