When we are weak God gives the strength. 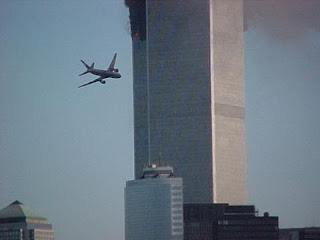 Daniel 10:19 (ESV)
And he said, “O man greatly loved, fear not, peace be with you; be strong and of good courage.” And as he spoke to me, I was strengthened and said, “Let my lord speak, for you have strengthened me.”

On Tuesday, September 11, 2001, began like any other day Stanley Praimnath was in his office at World Trade Center Tower Two. The deacon and Sunday School Superintendent for Bethel Assembly of God of South Ozone Park, New York, looked out his window and saw United Air Lines Flight 175 heading straight for him.

"All I can see is this big gray plane, with red letters on the wing and on the tail, bearing down on me," said Stanley. "

But this thing is happening in slow motion. The plane appeared to be 100 yards away. I said, 'Lord, you take control. I can't help myself here.'" Stanley then dove under his desk.

"My Testament [Bible] was on top of my desk," explained Stanley. "I knew, beyond a shadow of a doubt, that the Lord was going to take care of me once I got there."

As he curled into a fetal position under his desk, the plane tore into the side of the building and exploded. Miraculously, Stanley was unhurt. However, he could see a flaming wing of the plane in the doorway of his department. He knew he needed to get out of his office and the building fast. But, he was trapped under debris up to his shoulders.

"Lord, you take control, this is your problem now," he recalled praying. "I don't know where I got this power from, but the good Lord gave me so much power and strength in my body that I was able to shake everything off. I felt like I was the strongest man alive."

Stanley was exuberant but also in great danger. Trapped inside the office, fire was starting to spread. While praying on his knees, he saw a flashlight being carried by a man behind the wall, "There's one thing I got to know-do you know Jesus?"

The man replied he went to church every Sunday. Then they prayed together, asking God to enable them to break through the wall. "I got up, and I felt as if a power came over me," said Stanley. "I felt goose bumps all over my body and I'm trembling, and I said to the wall, 'You're going to be no match for me and my Lord.'"

Moments later, he punched his way through the wall and, with the help of the man on the other side, was able to squirm his way through the hole in the wall. "The guy held me and embraced me and he gave me a kiss and he said, 'From today, you're my brother for life.'" Both men were able to miraculously escape the burning tower that day.

The Lord is the giver of all strength.

Do you need a strengthening today?

Dear Lord, thank You that You give the strength when we need it most. We pray today that we would hang onto the peace that You give uses. In Jesus’ Name. Amen.
Posted by Ronald L Yahr, Jr at Thursday, July 16, 2015