Are you fulfilling your purpose? 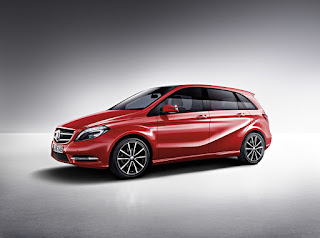 Stopping at a gas station, the new compact Tourer Vision B Mercedes Benz noticed one of his colleagues: "Hey SL65AM6. Long time no see!" he exclaimed to his new found company member.

"Who are you?" asked the sleek car with disgust.

"I am the new model that just came out." replied Vision B.

"New model? Ha. They must have been desperate! You don't look like any Mercedes Benz I know." Shouted SL65.

"I may not look much to you, but I am as fast as any other Mercedes Benz!" defended the Vision B.

"I am no such a thing and I can prove it!" replied the small car.

"Our Mercedes car convention in Atlanta is tomorrow at noon. You know how they insisted to be on time. I bet you I can reach it on time!" the little sputnik dared to reply.

"At noon! You believe you little nothing can drive 900 miles in 14 hours! Ha!" mocked the SL65. "I want to see that. In fact I am accepting your bet and will show you that I can reach that convention before you!"

"The deal is on!" agreed the little nothing.

Off went the SL65, sneering at the little car: "Don't forget to fill your car with gas!"

Soon, both cars were on their way to their destination. Vision B was oblivious to his surroundings and was concentrating solely on his destination. SL165 kept on laughing at the thought of that little "garbage truck" even reaching Atlanta. "How ridiculous and impossible!" He kept on looking at and enjoying his surroundings, the attractions of life grabbing his attention.

"Wow! A car wash resort! I must keep on shining to look beautiful and attract other cars to look at me"

And off the road he went. As he reached the car wash, he noticed that one of his wheels was not turning as smoothly as before. A nail had embedded itself in his right front wheel and the attendant had to fix it before he could be back on his way.

"It's all the fault of those negligent people!" exclaimed the proud SL65. "Can't construction workers clean their own mess? I lost time because of this. But why should I worry? Don't I have the most powerful engine in the world?"

Meanwhile, little sputnik was happily trotting along, unaware of his competitor's foes.

As the luxurious sedan approached one of the mega cities of America, he didn't notice that the car in front of him had to brake due to some construction work on the road.

BANGGG! CLANNGGG! The SL65 slammed right into that hapless car. From the looks of it, it was totaled. However the speedy Sedan had just a crumbled front fender and his front right side was a bit bend.

"But look what you have done. I can't even move any longer!" replied the devastated vehicle.

"Deserves you right. It's your fault entirely. You should be more attentive on the road. Off I must go!"

"But what about the police and the insurance?" exclaimed the hapless car.

"That's your problem, not mine!" sneered the luxury sedan. "Being the most powerful and best built car in the world, I don't have to worry about trivialities like these!" Not knowing where his competitor was, the SL65 started to laugh. He figured it was broken down somewhere, maybe even in a pit! "Ha-ha. I bet you it is at least 200 miles behind me!" he though happily. "But what do I smell? What is that yellow stuff I am leaving behind? I am leaking gas! Oh no! That snot of a car caused me to have a gas leak. I have no time for this! But wait... I do have some chewing gum. If I find the leak I can patch it with chewing gum. Yeah. Good idea! Chewing gum will fix my problem in no time!"

The beautiful sedan with a crumbled front fender, his bend front right side, his repaired right front wheel and his leaky gas tank stopped on the side of the road and started his inspection. It took him longer than foreseen, but he eventually found the leak, It was a bit larger than he thought, but at least his chewing gums (he needed more than one) covered most of the leak. As he went back on the highway, proud of his achievements, he still noticed some yellow residue falling from his car, but it was quite less than before, so why worry about it?

"I bet the slummy competitor is far worse off than myself. Ha-ha. I can imagine it to be already completely totaled! How can a little snot like him even get through the mega city I just went through? Ha-ha, its burial will be his destiny!"

He happily continued on his way. Nothing special happened until eight o'clock in the morning (most business are closed after 9 p.m. and SL65 are not attracted by trees and bees!). Although he had stopped several times for gas, he had neglected to check his gas gauge lately and the leak had become stronger than before. While bypassing a commoner, he all of a sudden ran out of gas and although he was puttering somewhat ahead, the truck behind him hadn't noticed his slowing down and hit him head on in the back.

"Ouch! How dare you collide with me? Who gave you permission?" complained the luxury sedan. The truck had hardly a scratch. However the SL65 had received the brunt of the collision, and his car seemed to have shortened by at least a third. It seemed he could only limp slowly ahead. He refused to wait for the police.

"I am a SL65. Laws don't concern me! I have a bet to fulfill. You just go away and deal with your own problems."

He couldn't bypass the 20 miles an hour and decided to stop at the next available garage. He settled for a quick fix. He didn't mind to be a bit shorter. He only wanted to make the Mercedes convention on time. The mechanic was able to bend some of his sides on the back and replace one of his back tires. He wanted to replace his gas tank as well, but as it required several hours of service, the SL65 refused.

Noon was fast approaching and he still had 100 miles to go. He would be late by at least 45 minutes. However road construction took a toll on his time and he eventually arrived at the convention at 1:28 p.m. As he was approaching the gate, he noticed that he had lost his front emblem made especially for him by Mercedes Benz.

"It must have happened at the garage, but who cares. I am only 1 hour and 28 minutes late!" he exclaimed.

However to his dismay the gatekeeper would not let him through.

"Who are you? I don't recognize you!" said the gatekeeper.

"Out of the way you idiot. I am an SL65. I am a Mercedes Benz!" replied the arrogant sedan.

"I had a car accident with a truck. I am much longer than this usually."

"No way! exclaimed the gatekeeper. "SL65 are much better designed than this. Look at yourself. You are quite a bit shorter than an SL65. You have no proof of being a Mercedes Benz, as you don't even have our insignia. You have a crumbled front fender, a bend front right side, a repaired right front wheel and a leaky gas tank with a crumbled back!"

"Moreover you are one hour and twenty-nine minutes late! A SL65 would never be late to this event! You are no Mercedes Benz! Out of the way! I don't know you. You cannot go in."

The SL65 lost all hope, but still wondered about the Vision B he had made a bet with. No way this little nothing could have reached his destination on time.

"Fist of all I am only one hour and twenty-eight minutes late. But did any white Vision B enter your gates?"

"The white Vision B? Oh yeah! I remember him all right. He was the first one here! He arrived at eight o'clock this morning!"

As the SL65 continued to complain and argue with the gatekeeper, all of a sudden he was towed away and brought to the scrap yard. His days were over. He hadn't fulfilled his destiny. Instead he had used his time on earth for selfish and arrogant purposes. The Vision B however enjoyed his eternal conference. He was rewarded as He knew his maker and had followed His direction. He had accepted the Maker's son as his personal Savior.

And you my friend are you fulfilling your purpose?
Do you know personally your Maker?
Have you accepted His Son into your life?

Dear Lord, thank You that You give each one of us a purpose. Help our eyes be open to the opportunities that You give to each of us. In Jesus’ Name, Amen.
Posted by Ronald L Yahr, Jr at Saturday, September 26, 2015