Standing on the truth 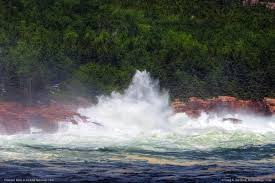 John 8:44 (ESV)
You are of your father the devil, and your will is to do your father's desires. He was a murderer from the beginning, and does not stand in the truth, because there is no truth in him. When he lies, he speaks out of his own character, for he is a liar and the father of lies.

It was Sunday, August 23, 2009. A fierce Hurricane, Hurricane Bill, pounded the coast of Mount Desert Island, in the state of Maine. Despite the inclement conditions, tourists came in droves to hear the resounding BOOMS that reverberated from Thunder Hole.

Thunder Cove is a small cove, naturally carved out of rock. At the end of this cove, down at the low tide mark, a small cavern can be found. When waves rush it, the air and water in the cavern are forced out with a loud BOOM, sounding much like the peal of distant thunder. Given the correct weather conditions, the water can spout up from the cavern, sometimes reaching a height of 40 feet.

And Hurricane Bill brought together just the correct conditions for the loudest booms and the highest spouts of water.

Warning signs were posted everywhere, counseling tourists to stay away from Thunder Hole in these conditions. Not everyone was inclined to listen to these warnings however, and many tourists could be found at the lower end of the lookout where you could best see and hear the water clapping through the cavern. And with so many people already down there, it only encouraged more tourists to ignore the warnings. After all, how could all of those people be wrong?

That is what a certain father with his two girls thought. Until he and his two girls were swept over the rail, that is, out into the stormy Atlantic Ocean.

In the icy water, the father and the girls battled for their lives. They were eventually rescued by the courageous Coast Guard, however the seven-year old later died from the trauma.

If only they hadn't followed the crowd!

Satan is one whose specializes in lies. He carves his lies so cleverly around half-truths that many fall prey to his insinuations. Sadly, most of the world believes his lies rather than the One who is called "the truth"!

We cannot, flirt with lies of the devil without being contaminated by them. It will change our perspective on life, and it will lead us to live a life grounded on untruth.  If we do not stand by the truth, we will find ourselves easily swept in the churning ocean! The apostles warned us about these liars:

We either stand on the truth, or we let ourselves be swept away by deception.

Dear Lord, help us stand in the truth. Help us to daily dive into Your word so that we may know the truth. In the Name of Jesus, Amen.
Posted by Ronald L Yahr, Jr at Friday, November 06, 2015