Is Your Trust in The Almighty? 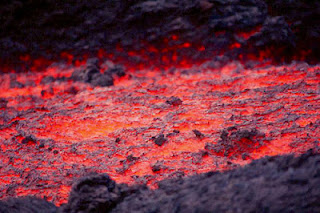 John 14:1 (New International Version)
“Do not let your hearts be troubled. You believe in God; believe also in me.

June 8, 1783 will always be remembered in Iceland. On that fateful day a 26 kilometer (16 mile) fissure cracked open in the volcano called Laki, and over 37 cubic meters (9 cubic miles) of lava erupted over the southern region of the island. This eruption, which lasted for nearly eight months, would have repercussions all over world.

One humble pastor faced this adversity with dignity. Though given the opportunity to leave, Jón Steingrímsson remained behind with his parishioners, dispensing food and money, even though thick ash clouds created perpetual darkness and winter-like conditions that lasted nearly a year. Even though he lost his beloved wife and many close friends to the ravages of this eruption, he continued to put his trust in the One who he called his friend: Jesus Christ Himself.

One day a huge wall of lava was heading straight to
Kirkjubæjarklaustur, his hometown. It didn't stop him from conducting a church service, however. He preached with passion that day, and his discourse, which is now called the "Fire Mass", will never be forgotten. He concluded the service by saying, "Let us pray to God in correct piety, that He in His grace will not want destroy us in haste. Each and every one pray without fear. Each and every one be ready to die if it pleases Him. Not in ours, but Your name do we praise glory."

As the members left their humble congregation, they were amazed to see that the lava had changed its course, thus sparing the town. Jón's prayers had been answered.

We may wonder if this was pure coincidence. Maybe the lava flow would have changed its course no matter what. Jón had no doubt, however, that his prayer of faith had been answered by God Himself.
Faith without doubting can truly stop anything, even the unstoppable!
When the Son of Man comes back, will He find us filled with faith and trusting in His providence? Or will He instead find us with troubled hearts, worrying about things He has already promised to take care of?

The huge wall of lava was stopped, not by coincidence, but by faith. Our perspective on worldly matters will either build up our trust in the Almighty or leave us troubled to the core.

Dear Lord we pray today that our faith in You would be strong. We pray that we wouldn’t doubt that You are in control. IN Jesus’ name, Amen.