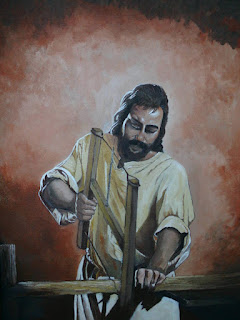 Romans 12:4-5 (New International Version)
4 For just as each of us has one body with many members, and these members do not all have the same function, 5 so in Christ we, though many, form one body, and each member belongs to all the others.

Is there somebody at your church, who just won’t cooperate is hard to get along with or who always has a negative attitude or sour spirit. The temptation is to think the church would be better off without them.
Continuing my series  form the workshop I found this cute parable about the tools in the carpenter’s tool belt.I think it will help explain this biblical principle...just the way Jesus’ parables do.

Brother Hammer served as the chairman. The other members of the tool belt informed him that he must leave, because he was too noisy. But brother Hammer said, "If I have to leave this carpenter’s shop, then brother Gimlet must go too. He’s insignificant and makes a very small impression." (A gimlet is a small tool with a screw point, grooved shank, and a cross handle for boring holes).

Little brother Gimlet arose and said, "All right, but brother Screwdriver must go also. You have to turn him around and around to get anywhere with him."

Brother Screwdriver turned to the other tools in the belt and said, "If you wish, I will go, but brother Plane must leave too. All of his work is on the surface; there’s no depth to what he does."

To this brother Plane leveled his terse reply, "Well, then, brother Saw will have to depart too. The changes he proposes always cut too deep."

Brother Saw complained, saying, "Brother Ruler will have to withdraw if I leave, for he’s always measuring other folks as though he were the only one who is right."

Brother Ruler then surveyed the group and said, "Brother Sandpaper doesn’t belong here either. He’s rougher than he ought to be, and is always rubbing people the wrong way."

In the midst of the discussion, the Carpenter of Nazareth walked in. He had come to perform his day’s work. He put on His tool belt and went to the workbench to make a pulpit. He employed the ruler, the saw, the plane, the hammer, the gimlet, the screwdriver, the sandpaper, and all the other tools.

When the day’s work was over, the pulpit was finished, and the carpenter went home. All the accusations against each of these tools were absolutely true, yet the carpenter used every one of them. No matter which tool He used, no other tool could have done the work better. And the final product would be used to preach the glorious gospel of Jesus Christ!

You and I are God’s "tools". While we have our flaws, each of us has a purpose, ability, and a task to perform. Won’t you accept the value of the other tools, and let God use you today?

Dear Lord we thank You that You made us each special with a specific job to do. We pray today that we will work together as a team to build the pulpit so Your love can be preached from it. In Jesus’ name, amen.

Email ThisBlogThis!Share to TwitterShare to FacebookShare to Pinterest
Labels: carpenter, Tools, Working together