He Holds it All in the Palm of His Hand. 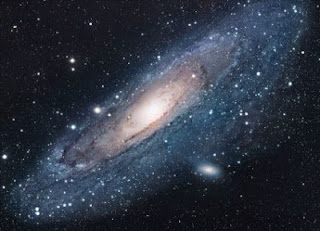 Psalm 19:1-4 (New International Version)
1 The heavens declare the glory of God;
the skies proclaim the work of his hands.
2 Day after day they pour forth speech;
night after night they reveal knowledge.
3 They have no speech, they use no words;
no sound is heard from them.
Yet their voice goes out into all the earth,
their words to the ends of the world.
In the heavens God has pitched a tent for the sun.

Let’s pause for a moment and ponder the boundless expanse of the universe. Do so and you will catch a fleeting glimpse of His unlimited glory! In the words of David, "The universe declares it." God's creation is not limited to the earth but encompasses even the unknown universe. He arranged the stars of the heavens with His fingers. (See Psalm 8:3.) For most of us, it is difficult to comprehend the vastness of the universe.

Beside our sun, the nearest star is 4.3 light years away. So that this number does not remain just a figure, let's expound on it. Light travels at the speed of 186,282 miles per second-not per hour but per second. That is roughly 670,000,000 miles per hour. Our airplanes fly approximately 500 miles per hour.

The moon orbits roughly 239>000 miles from the earth. If we traveled by plane to the moon, it would take nineteen days. But light reaches there in 1.3 seconds!

Let's continue. The sun is 93,000,000 miles from the earth. If you boarded a jumbo jet today and traveled to the sun, your journey would take over twenty-one years! That's nonstop too! Where were you twenty-one years ago? That's a long time. Can you imagine flying that long without a moment's break in order to reach the sun? For those who prefer driving ... well, it couldn't be done in a lifetime. It would take roughly two hundred years, not including any gas or rest stops! Yet light travels this distance in a mere eight minutes and twenty seconds!

Let's leave the sun and move on to the nearest star. We already know it is 4.3 light years from the earth. If we built a scale model of the earth, sun, and nearest star, it would be as follows. In proportion, the earth would reduce to the size of a peppercorn, and the sun would become the size of an eight-inch-diameter ball. According to this size scale, the distance from the earth to the sun would be twenty-six yards, which is only a quarter the length of a football field. Yet remember, for a scale airplane to span that twenty-six-yard distance, it would take more than twenty-one years.

To reach this closest star by airplane would take approximately fifty-one billion years, non-stop! That's 51,000,000,000 years! Yet light from this star travels to earth in only 4.3 years!

Let's expand further. The stars you see at night with the naked eye are one hundred to one thousand light years away. However, there are a few stars you can see with the naked eye that are four thousand light years away. I wouldn't even attempt to calculate the amount of time it would take for a plane to reach just one of these stars. But, think of it; light travels at a rate of 186,282 miles per second, and it still takes four thousand years to reach the earth. That means the light of these stars was first released before Moses parted the Red Sea, and has traveled a distance of six hundred seventy million miles every hour without slowing down or ceasing since, and is just now reaching the earth!

But these are only the stars in our galaxy. A galaxy is a vast gathering of usually billions of stars. The galaxy in which we live is called the Milky Way. So let's expound further.

Scientists estimate there are billions of galaxies, each of them loaded with billions of stars. Galaxies tend to group together. Andromeda Galaxy and our Milky Way are part of a cluster of at least thirty galaxies. Other clusters could contain as many as thousands of galaxies.

The Guinness Book of World Records states that in June 1994 a new group of cocoon-shaped clusters of galaxies was discovered. The distance across this group of galaxies was calculated at six hundred fifty million light years! Can you imagine how long it would take to cross such a vast distance by airplane?

The Guinness Book of World Records also states that the most remote object ever seen by man appears to be over 13.2 billion light years away. Our finite minds cannot even begin to comprehend distances this immense. We've yet to glimpse the ends of the galaxy clusters let alone the end of the universe. And God can measure all this with the span of His hand! To top it off, the psalmist tells us, "He God counts the number of the stars; He calls them all by name. Great is our Lord, and mighty in power; His understanding is infinite" (Ps. 147:4-5). Not only can He count the billions upon billions of stars, but He knows the name of each one! No wonder the psalmist exclaimed, "His understanding is infinite."

Dear Lord we thank You for how great You are and wonderful Your creation is. We pray that we would always praise You for all You have done for us. In Jesus’ name, amen.

Email ThisBlogThis!Share to TwitterShare to FacebookShare to Pinterest
Labels: Milky way, Palm of His Hand, universe