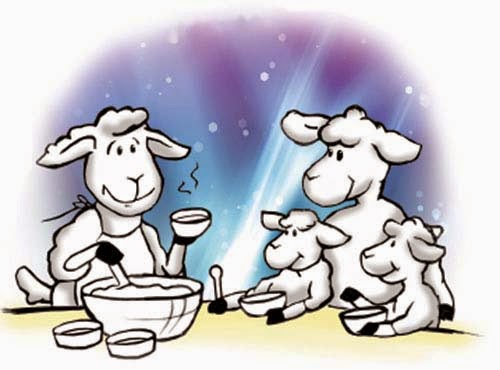 John 21:17 (NIV)
The third time he said to him, “Simon son of John, do you love me?” Peter was hurt because Jesus asked him the third time, “Do you love me?” He said, “Lord, you know all things; you know that I love you.”
Jesus said, “Feed my sheep.

At the beginning of the World War II, Israel Eugenio was the chief Rabbi of Rome. The Nazis occupied Rome in September 1943. The Nazi officer Kappler demanded 50 kg of gold in place of the Jews.

The Jews feverishly managed to collect 35 kg. The chief Rabbi Zolli realized his helplessness. For the first time he stepped into the Vatican and begged Pope Pius XII: "The New Testament must not abandon the Old Testament!" By afternoon, the Pope got the remaining 15 kg of gold collected from the parishes of Rome.

But Kappler took the Jews as well as the gold. The deportation of the Jews from Rome was fixed for 16 October 1943. Out of the 8000 Jews of Rome, the Pope managed to get 4447 Jews hidden in over 150 monasteries and parish houses, hidden against the threat of the highest punishment from the Nazis. Till the threat was over, they were provided with all they needed for survival.

On 17 February 1945, eight months after the American Army liberated Rome, in gratitude to the Church for what it did for his people at his request, the Chief Rabbi of Rome, Israel Zolli, after 40 years of rabbinical studies, came to the Church of the St. Mary of the Angels and was baptized into the Catholic Church. He had rejected the New Testament for most of his life, but Zolli accepted Christ after reading the Gospels.

He said: "This event, in my soul, was like the arrival of a beloved guest. I began only to hear the voice of Christ expressed more clearly and more strongly in the Gospels. In my soul, God did not reveal Himself at all by means of tempest or fire, but through a gentle murmur... I became aware of a God Whom I loved, a God Who wants to be loved, and Who Himself loves."
We can praise the Lord He's the God of Second Chances.  If you have you disobeyed God, what would you do if given that second chance?

Dear Lord, thank You for the second chance that You give each of us. Help us obediently follow You. In Jesus’ Name, Amen.
Posted by Ronald L Yahr, Jr at Thursday, April 17, 2014

Email ThisBlogThis!Share to TwitterShare to FacebookShare to Pinterest
Labels: feed my sheep