The Lord Works in Mysterious Ways 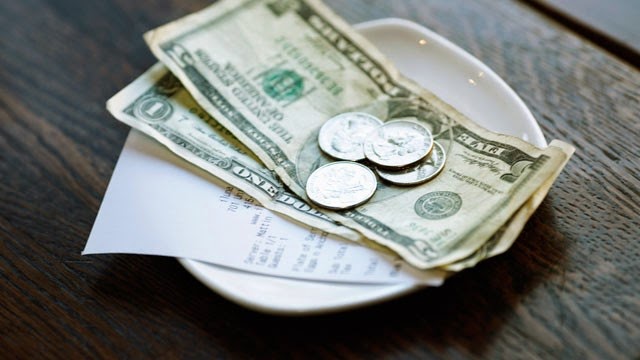 Romans 8:28 (NIV)
And we know that in all things God works for the good of those who love him, who have been called according to his purpose.

This story is about a young lady, Alison, who is a waitress on the lunch shift at an upper class seafood restaurant.

Alison probably holds the record for the most jobs by age 25, but she has worked at this one for about a year now, which is good for her. As with any job, there are good days and bad, mostly reflected in what she makes in tips.

One week, she called her dad almost in tears, telling him of a server's worst nightmare -- spilling an entire meal in a customer's lap!

She said the lady was gracious as she rushed to get club soda to try to help get the stains out, even accompanying her to the rest room to try to help. Her horror was intensified when she discovered that the out-of-town lady was here for a banquet to be held in her late father's honor that evening, and she had nothing else to wear. The rest of the party was less than hospitable about the incident, which is understandable.

Alison felt horrible when she went back to the table and, finding only one gentleman left in the party awaiting the check, she offered him $30 -- most of her tips that day -- to buy the lady a new blouse to wear to the banquet.

The money was refused, but Alison was sure that she needed to find a new line of work and left that day in tears.

A new day always dawns, and indeed a different Alison called her dad a few days later to tell him of yet another episode.

It seems she waited on a couple of extremely nice elderly gentlemen who each had shrimp dinners, with a bill totaling about $30. When she left the table to ring up the sale, she noticed that they had left her a tip of $30! Sure that something was wrong, she went back to the table and questioned the gentlemen.

One of them said that, no, that was correct -- she was a wonderful server and she had earned every penny because she was so nice to them.

She told the man that she felt like hugging him and that was probably the best tip she had ever received, then proceeded to tell him about the incident of last week.

His response was, "How much did you say you tried to give that lady?"

When she replied, "Thirty dollars", he smiled at her and said, "The Lord works in mysterious ways."

We can always count on God working out the details. Our job is to trust Him in all things.

Dear Lord, thank You that You are always in control. When we don’t understand what is happening give it to the Lord and wait for His answer. In Jesus’ Name, Amen.
Posted by Ronald L Yahr, Jr at Friday, August 08, 2014