Lessons From My Foster Elephant Sities 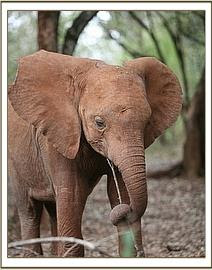 For my birthday a few years back my son fostered an elephant from the David Sheldrick Wildlife Trust in my name for a year. Throughout the year I got updates and learned all about my elephant Sities.

March 26, 2009: Tassia was only 9 months when he was found, very weak and thin, wandering around alone. He had been an innocent bystander as poachers had killed his mother for her ivory. Now he was doomed to die, alone and desperate.

April 17, 2009: Bhaawa,a five month old baby, was found in despair, bogged down in the mud of a drying waterhole in the Kirisia Hills near Maralal in Northern Kenya. He was suffering from shock and grief.

Were it not for the Sheldrick Wildlife Trust, these orphan elephants would have died.

Sheldrick began doing these kinds of rescue missions in 1952, and not only did he rescue orphan elephants, but orphan rhinoceros as well. Though he passed away in 1977, his wife continued his dream, and as a result, more than 100 elephant orphans, as well as numerous rhino orphans, have been saved. All of these elephants and rhinos were raised by the Trust and gradually rehabilitated back to communities in Tsavo National Park.

To a baby elephant, his mother and extended family are of utmost importance. Without them he is completely lost and vulnerable, both physically, and psychologically.

When an elephant baby is found alone, these ties have to somehow be re-established through humans. Elephant keepers remain with these orphan babies 24 hours a day, travelling as a group during the day, and sleeping next to them at night. Different keepers sleep with different cubs every night, so that strong attachments to one person can be prevented. As elephants are highly tactile and sociable animals, great care is given to shower them with love and acceptance.

Initially, feeding is a 24 hour job, but bit by bit the elephant babies are weaned onto a 3 hour feeding routine. When they reach one year of age, they are transferred to Tsavo National Park and absorbed back into older elephant families. In this way, they can begin their gradual integration back into the wild. This transition is made easier by the fact that elephants are highly sociable and that they are automatically fond of their young.

Elephants also have a remarkable memory. They are often able to recognize people who cared for them, even after more than 37 years. This happened to Eleanor, age 42, when she recognized the one who had been her keeper when she was just 5 years old!

None of these elephants would have ever been able to survive if it hadn't been for these keepers who devoted their life in saving them. I am sure if elephants could applaud, they sure would cheer their human rescuers! Hurray!

Someone did reach out to us, however, offering us eternity with Him: "Work hard for sin your whole life and your pension is death. But God's gift is real life, eternal life, delivered by Jesus, our Master." (Rom 6:23 The Message)

We don't need to wander around as orphans any longer. We can be adopted by the Most High God, and thus experience His immeasurable love for each one of us: "I will be a Father to you, and you will be my sons and daughters, says the Lord Almighty." (2 Cor 6:18 NIV)

All we need to do to have such a wonderful gift is to stop running away from God! We need to accept His offer. We need to welcome Him, as well as His adoption, into our lives. Unlike my foster elephant that lasted a year God adopts us forever.

Dear Lord, thank you for rescuing use when we were totally lost and desperate! Thank you for bringing us home and allowing us to experience your out-of-this-world love. In Jesus’ Name, Amen.
Posted by Ronald L Yahr, Jr at Saturday, June 22, 2013