A God of Second Chances 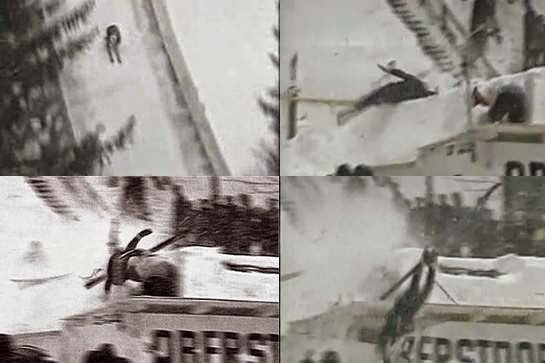 1 Peter 2:9 (NIV)
But you are a chosen people, a royal priesthood, a holy nation, God’s special possession, that you may declare the praises of him who called you out of darkness into his wonderful light.

His name may be unfamiliar now, but in 1971 it was a household name among sports enthusiasts.

Vinko Bogataj is famous in ski jumper history. In 1971, he took a head-over-heels tumble during a ski jump competition in Oberstdorf, Germany. Unfortunately, Wide World of Sports was there, captured every moment and then showed the fall at the beginning of their weekly show for years to come.

I'm not the king of fall downs but I am of bumping my toes. Weakness in my back causes my feet to run into things at times.

My bumps and stumbles aren't broadcast worldwide but they're just as disturbing and painful for me to endure.
Peter was adept at fall downs. He fell away at Jesus' arrest, fell back when asked if he was Jesus' follower and fell under when trying to walk on water. But Jesus gave him second chances leading him to write: "But you are a chosen people, a royal priesthood, a holy nation, God's special possession, that you may declare the praises of him who called you" (I Peter 2:9).

God allows stumbles, bumps and falls without disqualifying us from his service. We're His chosen children, and He won't unchoose us when we stumble over poor decisions or bump into unfaithfulness. God's requirement is holiness, but we're still his special possessions when we occasionally act unholy. He does not broadcast our stumbles worldwide. He just quietly picks us up and says, "Try again." Don't let the falls keep you down.

Dear Lord, thank You for giving us mercy and other chances when we fall short of Your standards. In Jesus’ Name, amen.
Posted by Ronald L Yahr, Jr at Thursday, January 08, 2015