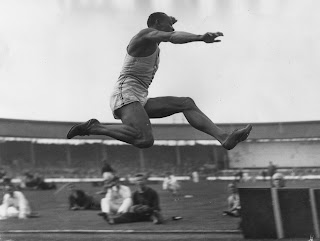 Encouragement is priceless. I have always tried to be encouraging to those I come into contact with. The last few months in particular I have been on the receiving end of encouraging words and YES they are priceless. I was reading last night online as I lay in the hospital about encouraging and came across this story.

Jesse Owens seemed sure to win the long jump at the 1936 Olympic games in Berlin, Germany. Just the year before, he had set three world records in one day. He was the record holder for the running broad jump with 26 feet 8 1/4 inches—a record that would stand for 25 years.

As he walked to the long jump pit, however, Owens saw a tall, blue-eyed, blond German taking practice jumps in the 26 foot range. Owens was nervous. He was aware of the tension created with his presence. He knew the Nazi's desire was to prove Aryan

The pressure was overwhelming, and on his first jump Owens inadvertently leaped from several inches beyond the takeoff board. Rattled, he fouled on the second attempt, too. He was only one foul away from being eliminated.

At this point, the tall German approached Owens and introduced himself as Luz Long. Then an amazing event took place. The black son of a sharecropper and the white model of Nazi manhood chatted in view of the entire stadium. What were they talking about?

Since the qualifying distance was only 23 feet 5 1/2 inches, Long suggested making a mark several inches before the takeoff board and jumping from there, just to play it safe. Amazing! At the beginning of World War II, this model of Germany's strength was providing technical assistance and words of encouragement to a foe both on and off the field.

Owens qualified easily. In the finals, he set an Olympic record and earned the second of four gold medals during the 1936 Olympics. The first person to congratulate Owens was Luz Long—in full view of Adolf Hitler.

Owens never saw Long again, for Long was killed in World War II. "You could melt down all the medals and cups I have," Owens later wrote, "and they wouldn't be plating on the 24-carat friendship I felt for Luz Long."


But encourage one another daily, as long as it is called today, so that none of you may be hardened by sin's deceitfulness.


Dear Lord we thank you for those that encourage us. Lord we pray that we would look for ways we can encourage those around us that really need it. In Jesus’ Name, Amen
Posted by Ronald L Yahr, Jr at Thursday, October 07, 2010