Press On Toward the Goal. 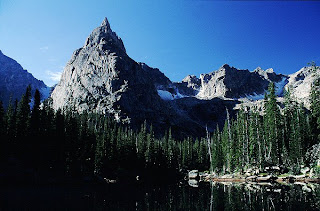 Behind the city of Colorado Springs, at the back of the U.S. Air Force Academy stands a mountain called Eagle Peak which is popular among local hikers, and Scouts in particular. From it's summit you can peer into the depths of the Rocky Mountains on one side or overlook the vast expanse of the Great Plains on the other. Each summer the trail leading to the peak is trod by those who've walked it's track before as well as those who make of it a new experience.
The inexperienced hiker is generally always told, if he cares to ask, that the hike will take all day to go up and back. He is told to start early and to set a strong, steady pace for the journey will be difficult and rigorous. The inexperienced hiker who follows this advice and plans accordingly can be easily disappointed and even become angry or confused upon reaching the beginning of the trail, because he can see with his own eyes from the parking lot that the hike to the summit and back would take far less than half a day with little difficulty at even the most leisurely pace.
And so he changes his plans. He meanders up the trail wandering frequently from the path, taking numerous side-trips and detours. He stops to play and to snack on some of the supplies he had brought since he obviously won't need so much for such a short trip. He goes well out of his way to avoid some of the more difficult parts of the trail. This he does until about half way through the day when he finally climbs to the summit only to discover that it was his eyes which had deceived him and not the words of those who had gone before. For he now stands on a false summit which had blocked his view of the higher summit far above.
Realizing his lack of foresight, this hiker now quickly reevaluates his time and decides that if he pushes himself hard enough he can still make it to the summit and back before it gets too dark. And so he sets off at a frantic pace; stumbling, crashing through the brush, receiving bruises, scrapes and scratches as the sun moves steadily toward the horizon. Until at last he reaches his mark and looks up at still another summit. You see, Eagle Peak has two false summits, both of which must be travelled over before reaching the real goal. Our inexperienced hiker now sadly begins his trek back down the mountain knowing he fell short of the goal he had sought after. He will try again another day, for there are many beautiful days in Colorado Springs. Wiser for his experience, he will doubtless reach his goal on the next occasion.
In our journey through life, however, we are not so fortunate. There are many false summits and if you strive toward only those goals which you can see, you will fall far short of the genuine goal.
- RD Clyde
Lets make it our goal to reach for the genuine goal and not get side tracked by the things in life that can lead us a stray. Lord keep us focused.


Brothers, I do not consider myself yet to have taken hold of it. But one thing I do: Forgetting what is behind and straining toward what is ahead, I press on toward the goal to win the prize for which God has called me heavenward in Christ Jesus.
- Philippians 3:13-14 (New International Version)

Dear Lord we pray that we would fix our eyes on the real goal. We pray that we will not lose sight of the goal by being side tracked. In Jesus’s Name, amen.