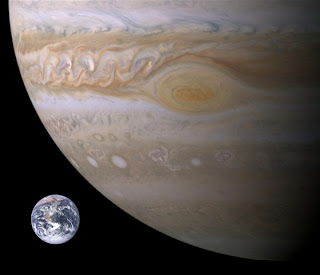 Have you ever wondered whether a giant asteroid might hit our planet, like the one that may have wiped out the dinosaurs on earth?

The planet Jupiter "is our first line of defense" says Allan Boss, an astrophysicist at the Carnegie Institution of Washington. "It is something like 99.9 percent efficient at throwing dangerous space junk, asteroids, and meteorites back out to interstellar space."

How does that happen?

Jupiter displayed its protective power six years ago when a monster comet broke into fragments and bombarded the planet Jupiter with more destructive power than all the atomic bombs on earth. Not all space particles get deflected by Jupiter, but living in Jupiter's gravitational field minimizes the destructive forces that enter the earth's atmosphere.

Considering Jupiter's protective role, the ancient Romans unknowingly named the mighty planet well. In Old Latin, Jupiter means "Sky-Father."
This is another great example of how wonderfully God has created everything, and how it all works together to sustain life.
The LORD is righteous in all his ways  and loving toward all he has made. The LORD is near to all who call on him, to all who call on him in truth.
- Psalm 145:17-21
Dear Lord, we praise you for the way you have made everything and the way all things work together for Your people. In Jesus’ name, Amen.
Posted by Ronald L Yahr, Jr at Tuesday, October 05, 2010

Email ThisBlogThis!Share to TwitterShare to FacebookShare to Pinterest
Labels: Jupiter