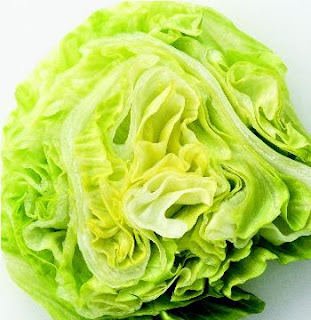 A man working in the produce department was asked by a lady if she could buy half a head of lettuce. He replied, "Half a head? Are you serious? God grows these in whole heads and that's how we sell them!"
"You mean," she persisted, "that after all the years I've shopped here, you won't sell me half-a-head of lettuce?"
"Look," he said, "If you like I'll ask the manager."
She indicated that would be appreciated, so the young man marched to the front of the store. "You won't believe this, but there's a lame-braided idiot of a lady back there who wants to know if she can buy half-a-head of lettuce."
He noticed the manager gesturing, and turned around to see the lady standing behind him, obviously having followed him to the front of the store. "And this nice lady was wondering if she could buy the other half" he concluded.
Later in the day the manager cornered the young man and said, "That was the finest example of thinking on your feet I've ever seen! Where did you learn that?"
Do you find yourself having to think fast because of what you said? What a blessing it would be if we could guard our tongue and not have to think fast to get out of the many troubles our tongue can cause.

For we all stumble in many ways If anyone does not stumble in what he says, he is a perfect man, able to bridle the whole body as well. Now if we put the bits into the horses' mouths so that they will obey us, we direct their entire body as well. Look at the ships also, though they are so great and are driven by strong winds, are still directed by a very small rudder wherever the inclination of the pilot desires. So also the tongue is a small part of the body, and yet it boasts of great things See how great a forest is set aflame by such a small fire!
- James 3:2-5 (New American Standard Bible)
Dear Lord we pray that we will be mindful of the things out tongues says. Please help us to be able to guard our tongue so that we don’t hurt those around us with the things we say. In Jesus’ name,  Amen
Posted by Ronald L Yahr, Jr at Sunday, October 03, 2010

Email ThisBlogThis!Share to TwitterShare to FacebookShare to Pinterest
Labels: tongue