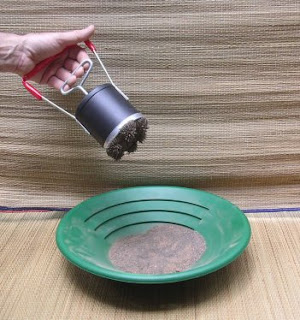 Matthew 27:52  (ESV)
The tombs also were opened. And many bodies of the saints who had fallen asleep were raised.

One day, a group of unbelievers, asked a Christian scientist this question: "As a person rooted in science, how can you believe that God will raise the dead from the dust?"

Working quickly, the scientist mixed a few handfuls of sand with the smallest of iron shavings. Then he challenged the unbelievers, saying, "Before I answer your question, let me ask one of my own: Which of you can take this pile and separate the particles into two groups?"

Taken off guard, the unbelievers didn't really think their answer through.

You know what the Christian scientist did. He took a high-powered magnet and held it over the mixed pile. In a second the filings "jumped" from the desktop onto the magnet.

Turning to the unbelievers he then challenged them with this thought: "If the Creator establishes the laws which give such powers to a magnet, how can you believe He does not have greater powers Himself? I believe if the unseen power of the magnet can pull iron shavings out of the dirt; my God can use His almighty power to call forth bodies which have turned to dust."

We serve an Amazing God. Pass it along.

Dear Lord, thank You for preparing a place for us in heaven with You even though we don’t deserve Your grace. Please forgive all our sins and help us overcome the temptations and evils in our life. In the Name of Jesus . Amen.