We are Free From the Bondage of Sin 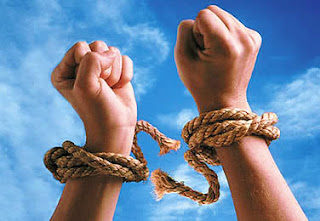 The son of a Presbyterian preacher was arrested, charged with treason because he belonged to an organization which had been outlawed by the Government. He was tried, convicted, and sent to the penitentiary. His aged father, eminent for his learning and Christian character, circulated a petition and secured hundreds of signatures, urging President Grant to pardon the boy for the sake of his parents. The father took the petition to Washington, presented it to President Grant, who gave the pardon. The old man received it and hastened to the train. On his arrival at the prison, he was shown the cell where his boy was imprisoned. Standing with his hand upon the grated door he said, "John, I have good news. I have a pardon from President Grant, and you may now go home with me, and see your mother before she dies!" But the son made no response. "Do you understand me, John?" the father continued. "Here's a pardon for you." "I am sorry, Father," said the ungrateful son, "to give you pain, but I cannot accept it. I have decided not to be brought under obligation to this political administration, and I will serve out my time!" The old man's father-heart was almost broken. He fell against the grating, and would have sunk upon the floor if he had not been caught by the friendly hand of the warden. A pardon is offered you from the High Court of Heaven, a pardon written in the blood of Jesus. Will you accept it and go free, or will you reject it and continue under sin's bondage?

Stand fast therefore in the liberty wherewith Christ hath made us free, and be not entangled again with the yoke of bondage.

Dear Lord, we thank You that we are no longer in bondage to the sin. We thank You for what you did for us. In Jesus’ Name, Amen.

Email ThisBlogThis!Share to TwitterShare to FacebookShare to Pinterest
Labels: Bondage