Working Together Makes us Stronger. 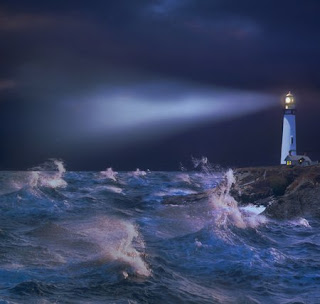 There is a story about a certain city harbor where ships from all over the world would come and dock. However, the harbor was in between a treacherous and rocky shore. During stormy nights, ships would see the city lights off in the distance and head toward the lights hoping to find refuge from the pounding surf.

The ships would struggle against the storm as they made their way to the safety of the harbor. As they drew near, seeing the dangerous rocks, the captain of the ship would try to turn and avoid striking the rocks but it was to late. Many ships were destroyed and hundreds of sailors lost their lives because they did not know of the danger. You see, the people of the city did not feel that it was necessary to build a lighthouse. Besides, it would cost too much money to build a lighthouse they reasoned. So year after year and storm after storm ships would be ship wrecked and many lives lost.

There was a man in that city that saw the need. He felt grief and heartache because the people of the city were content to let the ships be destroyed and were not willing to rescue the drowning sailors. So he took it upon himself to do something about it. He tried to recruit volunteers to help him but no one wanted to. He persisted, looking for someone to help him, but they all just laughed at him and said that he was crazy to risk his life to try to save strangers and people who looked different.

Determined to make a difference, he sold everything that he had and bought a piece of land close to the shore and built his house there. It was a lighthouse.

So during stormy nights, the man would make sure that the light from the lighthouse was shining as bright as it could so the ships could be warned of the dangerous rocks. His lighthouse saved hundreds of lives and ships from being ship wrecked that year. But it wasn't enough because even with the lighthouse some of the storms were so powerful that the ships struggling to come into the harbor were tossed about by the wind and the waves that they would get smashed against the rocks.

Being a compassionate man, he would run to the roaring sea at the risk of his own life to rescue as many sailors as he could. Then he would bring them into the warmth and safety of the lighthouse. Once there he would heal their wounds and feed them until they were able to sail again.

The man labored by himself for years rescuing sailors and caring for their needs. Each person that he saved was so grateful to him that they couldn't thank him enough for rescuing them from certain death. But all the man could feel was sadness because many more sailors died in the sea than he could save. "If only I had help," he would say. "If only someone would see the need as I do and come and help. Lord please send someone to help, I can't do it all by myself," he prayed.

Then one day it happened, his prayers were answered. His generosity became well known in the land. People in the city began to volunteer to come and help the man keep vigil during stormy nights. Men began to take shifts keeping watch and helping rescue sailors. Then women started cooking and preparing bandages for the wounded sailors. The children did whatever they could to help lift the spirits of the sick.

Ships still wreck along that treacherous shoreline, but now because there are so many people there to help the man, many more lives are saved than are lost. Together Everyone Accomplished Much. Together they made a difference.

Two are better than one, because they have a good reward for their toil. For if they fall, one will lift up his fellow. But woe to him who is alone when he falls and has not another to lift him up! Again, if two lie together, they keep warm, but how can one keep warm alone? And though a man might prevail against one who is alone, two will withstand him—a threefold cord is not quickly broken.

Dear Lord, we pray that we would work together in all things that we do making us a strong team for you. In Jesus’ Name, Amen

Email ThisBlogThis!Share to TwitterShare to FacebookShare to Pinterest
Labels: Working together