He is Lord of All 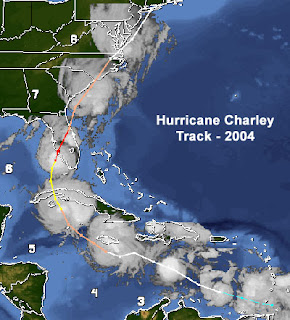 Hurricane Charley slammed into Florida on Friday, August 13, 2004, and became known as the worst storm since Hurricane Andrew in 1992. It claimed 27 deaths, destroying more than 10,000 homes and resulting in more than $10 billion of insurance claims.

In addition to the stories of tragedy and devastation were remarkable stories of hope and goodwill. Many people have told how neighbors have helped with tree removal and volunteers brought in ice. Others reported how they spent the evening that Hurricane Charley arrived at home in prayer. One woman related to a local Orlando television news reporter that God did not throw the roof of a nearby church onto her house, but instead was with her when she was praying for protection in her bathroom.

Many of the signs and billboards in the area were no match for Hurricane Charley. However, one billboard resisted the 100-mile per hour winds of the eye wall of the storm. Though the billboard stood, the most recent advertisement was pealed back by the hurricane's winds to reveal an earlier message. The earlier message had been created a few years prior by the Smith Agency of Fort Lauderdale, Florida, which had handled an assignment from a client by placing of a variety of billboards bearing non-denominational religious messages around the U.S. When the sun rose the morning following the storm in Orlando, the words on the billboard clearly read,

God is Lord of all! There is none like Him. Today in prayer, worship the Lord and praise Him for His omnipotence.

"Omnipotence teaches us that no power in all the universe can stop God or impede his plans. Not evil men. Not natural catastrophe. Not reversal of fortune. Not fate or luck or chance. - Paul Fritz.

Dear Lord we pray that in all things we would always remember that You are all powerful and nothing happens without your knowledge. In Jesus’ name, Amen.

Email ThisBlogThis!Share to TwitterShare to FacebookShare to Pinterest
Labels: All powerful, hurricane Charly