God Created the Heavens and the Earth 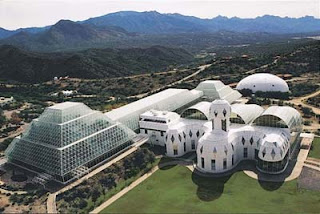 Psalm 102:25 (New International Version)
In the beginning you laid the foundations of the earth,
and the heavens are the work of your hands

On September 26, 1991, the first crew of Biospherians, 4 women and 4 men, entered Biosphere 2. Located in the Sonoran Desert about 30 miles north of Tucson, Arizona, Biosphere 2 was a 7.2 million cubic foot enclosure built at the cost of $200 million. This enclosed 3-acre ecological laboratory had a controlled habitat that had a rain forest, savanna, desert, marsh, ocean and agricultural area with all the factors to thought to be necessary to sustain life. The original crew was to remain in this airtight container for two years. However, after the first year, oxygen levels had fallen to the point that oxygen had to be added from the outside. Nineteen of twenty-five vertebrate species placed in the unit became extinct. All the species that could pollinate the plants became extinct, as did most insects. Water and air pollution became acute and temperature control was a problem. The crew lost so much weight that food was smuggled through the airlocks. With all the intelligence put into the design of Biosphere 2, it couldn't be made to work, yet some scientists still insist that the wonderfully integrated ecosystems of Earth supposedly just happened without intelligent design.

The more we study God's handiwork, the more we can appreciate His intricate and delicate design. Today in prayer, thank the Lord for creation and giving you new life in Jesus Christ.

"This most beautiful system of the sun, planets, and comets, could only proceed from the counsel and dominion of an intelligent and powerful Being. This Being governs all things, not as the soul of the world, but as Lord over all; and on account of his dominion he is wont to be called Lord God." - Isaac Newton

Dear Lord we thank You for being our creator. We thank You for the way everything works in order. We pray that we would never forget to be thankful to You for all You do for each of us. In Jesus’ Name, Amen.