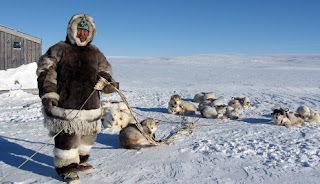 And do not forget to do good and to share with others, for with such sacrifices God is pleased.


Bishop Stringer and his companion were facing starvation that late October morning. They had been returning home from the Mackenzie region of the Yukon when they were overtaken by winter. Even though it was early in the season, the amount of snow that fell during that first storm was enough to make them lose their way in the mountains.


They didn't despair, however. Instead, they looked at their sealskin boots and wondered if they could be edible. The notes left in Stringer's diary are quite revealing: "Thursday, October 21: Breakfast of sealskin boot, soles and tops boiled and toasted. Soles better than uppers. Soup of small scraps and bacon…the last we had; hands sore; took a long time to pack up…"


Isaac Stringer, one of the first to arrive in the Yukon, was aghast at the influence the whalers were having on the native population. Whalers supplied the First Nations people with alcohol and then took their women as their "mistresses". The consequences were devastating: alcoholism and disease, both sexually transmitted as well as common ones that the Inuvialuit had no immunity to, abounded. Very early on, Isaac succeeded in securing an agreement with the whalers that closed down the alcohol trade with the Inuit. Eventually he provided church services and literacy classes for both the Inuit and the whalers.


His task was not an easy one, however. He often had to travel long distances in harsh conditions, and his eyes eventually contracted snow blindness, a condition that is quite agonizing and incapacitating.


And his story isn't unique. Another bishop in the Yukon by the name of Bombas decided to live like the natives. He slept on the floor rather than in a comfortable bed, he dressed poorly and he gave away all of his possessions and money. He was well-liked, and as a result, he was quite successful in his ministry.


Were all these sacrifices worthwhile?


We generally prefer to avoid unnecessary sacrifices. However some of our sacrifices are unavoidable and still others are commendable.


What does Paul mean by this? He explains it in the next verse: "Do not conform any longer to the pattern of this world, but be transformed by the renewing of your mind." (Rom 12:2a) The rewards are astonishing, friends: "Then you will be able to test and approve what God's will is-his good, pleasing and perfect will." (Rom 12:2b NIV)


Dear Lord we pray that we would be willing to sacrifice for those around us, so that we can bring them to You. In Jesus’ name, Amen.