Simply Because the Rope Broke! 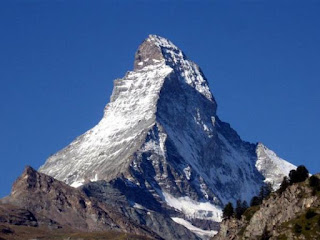 John 8:31-32 (New International Version)
31 To the Jews who had believed him, Jesus said, “If you hold to my teaching, you are really my disciples. 32 Then you will know the truth, and the truth will set you free.”

Sir Edward Whymper was determined to be the first one to reach the summit of The Matterhorn with his party of seven. It was July 14, 1865, and this was his eighth attempt. But 8 was his lucky number. Everything should go well.

Relying heavily on ropes for security, Sir Edward and his team made their ascent on that famous Swiss mountain, and their perseverance paid off. Before the day was over, they stood on the top of the mighty Matterhorn. He had done it! He had made it to the top!

It wasn't until the descent that disaster struck. One member of the party slipped off the mountain and tumbled into the valley below. Because all seven climbers were attached together via a rope, the momentum of his fall pulled another three members of the party off the mountain, and all four fell to their death.

Why didn't the accident pull Sir Edward and the other two climbers over the edge as well?

Simply because the rope broke!

Funny, isn't it. Sir Edward was relying on a solid rope. However, if it hadn't broken, his "security" would have resulted in his death!

This reminds me of human belief systems. We grow up with them, we rely on them, but they aren't always reliable!

Researchers have estimated that about 85% to 90% of our brain activity occurs in our subconscious mind, which is part of our soul. Since our subconscious minds shape every facet of who we are, including our actions, our reactions, our habits, and our personality, it impacts heavily upon our decisions. Basically, it becomes the center of our belief systems.

As information from our daily lives filters into our subconscious minds, mental images are created. These mental images are broad underlying observations of how we assume things around us really are. Whether true or false, they become our version of reality.

Remember what happened in Eden? Our soul took the upper hand over our spirit and we no longer were depended on God. Since then we have become susceptible to these negative strongholds of the mind.

Because of their destructive power over us, Satan will certainly encourage such negative fortresses in the mind, keeping them strong through deception, one of his favorite weapons!

But then again, we do know that he is full of lies and it doesn't surprise us how he tries to turn everything to his advantage, as his goal is our very destruction.

There is hope, through the One who can truly set us free.

Dear Lord we thank You for setting us free. We Thank You for the gift of life that You gave to each one of us. In Jesus’ name, Amen