The Price of True Freedom. 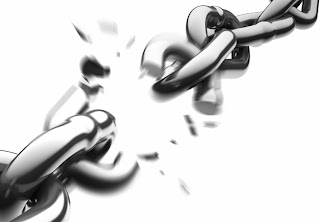 Galatians 5:1 (New International Version)
It is for freedom that Christ has set us free. Stand firm, then, and do not let yourselves be burdened again by a yoke of slavery.

Through no fault of her own, she found herself a slave to the undesirable passions of the ones she called "family". Bruised and broken by the hardships of her life, lost in the clutches of someone else's sin, she had nowhere to turn. She desperately needed a positive role model in her life; but there simply wasn't one to be had.

Then she became introduced to the music of a popular songwriter and artist. Everything about this singer, from her clothing, her manner, her style, even the words of her songs, spoke of disenchantment and rebellion against authority. This was something the disillusioned teen could relate to. She proceeded to dress like this singer, to talk like her, to style her hair like her, to want what she wanted, to dream what she dreamed. She had finally found her role model. But it didn't bring her the happiness she craved.

The seemingly endless cycle of abuse finally came out into the open, and the law brought it to an abrupt end. But now the secret was out. All of her family knew. All of her friends knew. The shame was more than she could endure. The nightmare had ended, but a new one had begun.

To her surprise, the request was greeted with enthusiasm and she was invited to find shelter in their home. A series of miracles brought her through immigration, and in this new land, this new home, surrounded by love, she began to blossom.

It was a glorious day when she discovered that human fathers don't always accurately portray our Heavenly Father. She hungrily grasped salvation, and little by little she was filled with light from above. This was visible in her countenance. The dark shadows under her eyes vanished. Her smiles became genuine. She was able to talk about the past, and the simple act of confessing the things that had haunted her liberated her from the invisible burdens that had been weighing upon her shoulders. She was able to forgive those who had hurt her so badly, and for the first time in her life, she experienced true freedom. From a rose, trampled to the ground, she transformed into a butterfly.

A few years later, she met and married a wonderful Christian man, and they now have two beautiful children who are growing in the shelter of the Lord. Jesus indeed changes people who are enslaved to sin, into free sons and daughters of the Kingdom.

Those who discover who God truly is and accept Him into their lives discover abundant freedom: "So if the Son sets you free, you will be free indeed." (John 8:36 NIV)

Even though those who accept Jesus' gift of salvation become slaves to God, our loving Heavenly Father doesn't consider us as His slaves, but as His sons and daughters, heirs to His kingdom! "So you are no longer a slave, but a son; and since you are a son, God has made you also an heir." (Gal 4:7 NIV)

Dear Lord we pray today that we would surrender all to You. We no longer want to be slave to the sin nature. In Jesus’ Name, Amen.