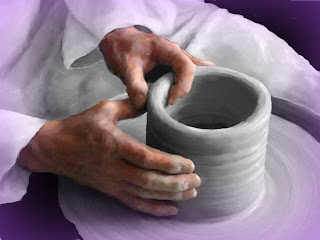 1 The Lord gave another message to Jeremiah. He said, 2 "Go down to the shop where clay pots and jars are made. I will speak to you while you are there." 3 So I did as he told me and found the potter working at his wheel. 4 But the jar he was making did not turn out as he had hoped, so the potter squashed the jar into a lump of clay and started again.


The Christian author Phillip Keller wrote in one of his books about a time when he was traveling around the border of China and Pakistan. He was told that this was the area where the finest Chinese pottery was made. He remembered verses like the ones above and asked if he could go see some of it being made.


The potter took him to a shed behind the house where he prepared the clay. It was not merely clay but had grass clippings, etc. mixed in. When the man opened the door the smell of the rotting material almost knocked Phillip down. The man went inside, mixed up a lump of clay and then took it inside to his wheel.


He worked with the clay to make a vessel. He noticed a tiny rock in the wall of the vessel he was forming. He knew the vessel would not hold up with that foreign matter in it so he took it out. Then he had to mash the clay into a lump and start again.


When the vessel was formed the man reached back to grab a string behind him which was hanging on a nail. He dipped this string in water, looped it around the base of the vessel and cut the vessel away from the rest of the clay.


The potter then placed the vessel on a shelf. There it sat until the potter knew it was time to put it into the fire. The potter knew how many times it needed to be fired before it could be of use.


This is a good parable of the Christian life. There is one difference, though. The master Potter does not barge in and grab a lump of stinky, filthy clay. He stands at the door and knocks. You must place yourself into the potter's hand.

Dear Lord we want to have You mold us and make us into what You want for us to be today. In Jesus’ name, Amen.