Lessons learned from the Purple Loosestrife 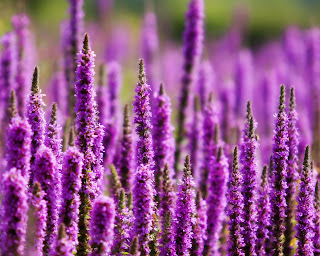 Matthew 18:11 (New American Standard Bible)
For the Son of Man has come to save that which was lost.


Have you ever seen the Purple Loosestrife?


Purple Loosestrife, is a beautiful but deadly flower that has meant the end of acres of Canadian wetland.


But how can this be?


Many species of amphibians, birds, insects, fish, plants and reptiles depend on healthy wetlands for their survival. When Purple Loosestrife, an European marsh-loving plant, sets foot in a wetland, it will quickly propagate and destroy any local vegetation. Its tenacious root system crowds out other native wetland plants, turning the habitat into a monotypic kind of culture (making sure only its specie remains in that area) that provides very little shelter and food to the wetland creatures. In fact, the only nourishment it provides is to bees and butterflies.


As it grows and blooms in this enemy free environment, nothing can be done to stop its ravaging effects on our environment. Pulling it out has only a temporary benefit, for the root hairs left in the soil quickly reproduce new plants. Hope seems to only be available by introducing its natural enemy, the European beetle, to the surroundings. But who knows what effect this would produce in North America.


There was another enemy introduced to our world years before Purple Loosestrife. Its effects aren't limited to wetlands, but encompass the entire planet. The longer its tenacious roots penetrate the soil, the more attractive it appears and the more people fall prey to its deceptions. In fact, no person has ever been left untouched by this enemy, which is none other than the hideous sin that crept into the Garden of Eden 6000 years ago. Humanity has never been the same, and none have ever been able to shake off its effects. None that is, except Jesus!


Jesus came to redeem the unredeemable. He reached out toward the untouchables. He searched for the lost. In one word, He was the remedy to the Purple Loosestrife of sin. Matthew 18:11 (NASB)For the Son of Man has come to save that which was lost.


But unlike the European beetle, we know the long-term effects of those who have welcomed and experienced Jesus in their life:


One day an atheist approached a renowned Christian professor with the following challenge:


"I want to debate against you concerning your beliefs. I don't believe in God and I will prove your student body that He does not exist!"


The professor looked at the atheist with sympathy and replied:


"Agreed on one condition. Bring a hundred people whose life were transformed by atheism to the discussion."


"That…that is impossible" stammered the atheist. "That can't be done!"
"Well what about bringing ten people then?"
"But…but…Do you really know what you are asking?"

"Just bring me then one person who experienced the beneficial effects of atheism and I will bring with me at least a hundred people whose life were affected by the one called Jesus Christ. I will bring drug addicts who were released from their addiction through the power of Jesus. I will get former alcoholics who were set free from this substance addiction thanks to Jesus. Former sex addicts will come as well and testify about the power of love from God Himself…"
The atheist quickly withdrew his request. He had nobody he could bring to defend atheism the way that professor challenged him to do.
Purple Loosestrife? Yes, quite a beautiful flowering plant, but deadly to its surrounding.
Sin? Very attractive to many, but deadly to its surrounding as well. What will YOU do about it?


Dear Lord we thank You that You came to be the remedy of sin. We pray today that we would hold on to that promise when sin comes up against us that we would be able to not give into it. In Jesus’ name, Amen.

Email ThisBlogThis!Share to TwitterShare to FacebookShare to Pinterest
Labels: Purple