Are You Ready to Serve? 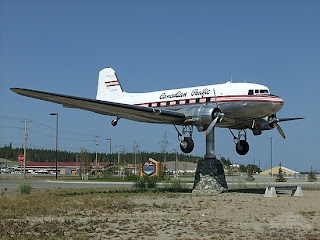 Psalm 92:14-15 (NASB)
14 They will still yield fruit in old age;
They shall be full of sap and very green,
15 To declare that the Lord is upright;
He is my rock, and there is no unrighteousness in Him.

As a weather buff the story of world's largest weather-vane intrigued me. Yukon is the home to the to it.
Much to my amazement the weather-vane was a DC3, a Douglas plane serial No. 4665!

With a length of 64 feet 5.5 inches and a wingspan of 95 feet, this plane swivels around at the top of a pedestal, always faithfully pointing into the wind. No wonder it is the largest weather-vane in the world!
This particular DC3 hasn't always been a weather-vane  however. It was built in August 1942, during World War II, and its first mission, under the disguise of camouflage, was to transport goods into India and China.

After the war it was acquired by the Canadian authorities and issued registration "CF-CPY". It flew many routes throughout Canada, especially in the Yukon. With a total flying time of 31,581 hours, it can certainly be said that it served its country well!

The CF-CPY's usefulness appeared to end however, one fateful day in November 1970, when it crashed. It wasn't until seven years later that the Yukon Flying Club undertook the task of restoring the plane, and after 4 years of work, it is now mounted on its pedestal to forever show the citizens of Whitehorse what direction the wind is blowing. It would seem that despite the crash, the usefulness of this particular DC3 carries on!

Reflecting on this, I realize that once someone retires from active duty, the "golden years" sometimes turn out to be stale and lifeless. But they don't have to be! One's usefulness is only over when we let it be over!

I read of a lady who had dreamed her entire life of becoming a missionary to China. She was never able to fulfill her dream until after she had retired! She then went through the training, applied to the mission’s board, and began serving in China. Just before this lady left the western world, she was diagnosed with cancer. This didn't stop her, however. To her it didn't matter where you died, as long as you were in the will of the Lord when you did!

I heard of another elderly gentleman who was dying in his hospital bed. Most would think that his usefulness was completely used up, but one night he took the time to talk about Jesus with a fellow patient. He was able to lead this roommate to the Lord, and his dying words were, "Another one out of the grasp of Satan!"

I know of young people who couldn't care less if they were useful in life or not. If they could have their own way, they would lie on the coach and watch T.V. 24/7! So as you can see, one's usefulness is not restricted by age. Rather it is lack of determination and willingness that restricts usefulness!

What are you plans with your life? How will You serve God?

Dear Lord, we pray that we would serve You no matter what stage of life we are in. Help us be willing to serve right where we are. In Jesus’ Name, Amen.

Email ThisBlogThis!Share to TwitterShare to FacebookShare to Pinterest
Labels: largest weather-vane in the world, serving