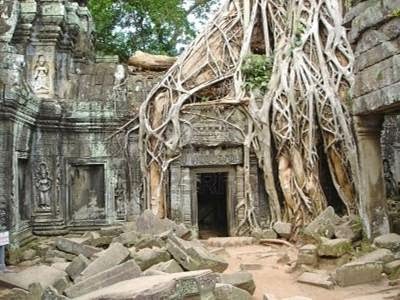 Psalm 29:9 (NIV)
The voice of the Lord twists the oaks
and strips the forests bare.
And in his temple all cry, “Glory!”
European archaeologists in the 1920s were a bit baffled by their find in Cambodia. About a mile east of Angkor Thom they discovered an abandoned monastery overtaken by what looked like octopi-rooted trees.
Research indicated that indeed a Buddhist temple and monastery had been built at that place in 1186 A.D, by the Khmer monarch Jayavarman VII. He named it, "Rajavihara". For those of us limited in our Cambodian vocabulary, this mean, "Royal Monastery". Interestingly enough, he dedicated his endeavors to his mother, whom he symbolically identified to Prajnaparamita, the goddess of wisdom. Today that temple is called Ta Prohm or "Old Brahma".
The Khmer empire was not destined to last forever, and it fell in the 15th century. Soon afterwards the "Royal Monastery" was abandoned and left to the elements. Nature then proceeded to take over with a vengeance, and it wasn't long before vegetation conquered the entire spot.
The most impressive of nature's work is the humongous trees that sunk their gnarled, octopus-like roots through the stonework and into the soil below, pushing aside stones and crumbling entire sections of the masonry.
This entire place is vivid evidence of the irony in trying to please "gods". God's creation has taken it upon itself to overtake these faulty attempts. While lifting their branches reverently towards the sky to praise the Creator of Heaven and Earth, the roots of these massive trees have succeeded in completely destroying the very essence of human attempts to reach up to the heavens! One can only stand in awe in such a place and join the trees by lifting one's hands to worship the real Creator!
I wonder if this kind of trees would revive the slumber of some believers around the world? Only by being rooted in the One who is not only our Creator, but also our Savior, will we stand firm.
Dear Lord, help us to keep ourselves completely rooted in You.  So that we can stand and be the witness that You would have us to be. In Jesus’ Name, Amen.
Posted by Ronald L Yahr, Jr at Saturday, October 10, 2015

Email ThisBlogThis!Share to TwitterShare to FacebookShare to Pinterest
Labels: roots