Is there a better sacrifice you could give God? 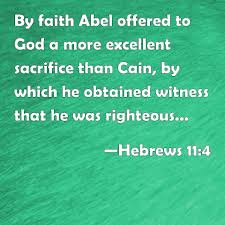 Hebrews 11:4 (ESV)
By faith Abel offered to God a more acceptable sacrifice than Cain, through which he was commended as righteous, God commending him by accepting his gifts. And through his faith, though he died, he still speaks.

His outfit of choice for Sundays was typical for his generation. Dark pants, white shirt, black shoes. He sat in the same pew each Sunday. Every Sunday you would find a single dollar bill tucked neatly in his shirt pocket. As the offering plate was passed, he delivered his offering. Had he been like the widow Jesus told of who gave everything she had, it would have been out of generosity. But it wasn't. His dollar didn't represent a tithe, an offering, or even a sacrifice.

Cain's wasn't either. Since he was a farmer, it was natural that he would bring produce to God as an offering. Yet that was the trouble-he only brought some. Abel, on the other hand, brought several of his choice lambs to God. Blood wasn't the issue; sacrifice was. Cain just gave some while Abel gave his best. God saw the motive and accepted Abel's. Cain's, he rejected.

Our sacrifices for God should be measured by His sacrifice for us. I have two sons, but I wouldn't sacrifice them for anyone, regardless of how much I might love them. God did, however, by placing his Son on a cross and then humanity's sins on him. This was the only way he could restore the relationship. With proper motives, he made the ultimate sacrifice.

Why we give and what we do is important. We give it out of appreciation. We can never repay God for what He's done, but giving is one way we can demonstrate our love. How much we give is also crucial. Single dollars-unless they represent all we have, won't result in God's Kingdom work advancing at a very rapid pace. Proportionate giving is what God desires…a sacrifice joyfully given. God wants actions from us as well. Money won't substitute for actions that involve love and sacrifice.

Is there a better sacrifice you could give God?

Dear Lord, help us give our best to You because You've given Your best to us. Help our giving be in both action and in the money You give to us. In the Name of Jesus, Amen.
Posted by Ronald L Yahr, Jr at Friday, March 11, 2016