Love laid down His life 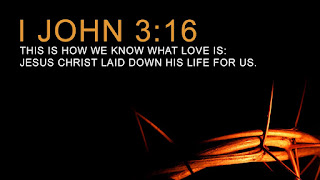 1 John 3:16 (ESV)
By this we know love that he laid down his life for us, and we ought to lay down our lives for the brothers.

It was just a few minutes before 7 a.m. when a 14-year-old girl got on the Yazoo County, Mississippi, school bus and made her way toward the back.

Those around her said she started waving the gun, ordering the driver to pull over, shouting and threatening the other children on the bus.

That's when Yazoo County football player Kaleb Eulls stood up and started walking toward the disturbed young lady. As Kaleb walked, in low tones, he kept repeating, "Put the gun down, put the gun down."

The girl didn't put the gun down, but she did look away from Kaleb. She looked away for just a second.

And that second was just what Kaleb needed.

The 6-foot, 4-inch, 255-pound football player did what he had been trained to do: he tackled that 14-year-old girl.

A second later, Kaleb was standing up with the gun in his hand -- a bona fide hero.

That's the way it was almost 2,000 years ago when our innocent Savior stood up against sin, death, and devil. His was a grand and gracious gift of love, an incredible act of bravery, which called for Him to be sacrificed so we might be forgiven. His life was the present that made it possible for everyone who believed on Him as Savior to be given eternal life.

Yes, sometimes these stories end up with the hero dying on a cross. Or do they end that way?

Of course, that wasn't the end of Jesus' story was it? Jesus' third-day resurrection says that He is victorious. He has conquered and He is our Redeemer.

Dear Lord, we give thanks for those that do what’s right and are willing to risk their life to save others.  Even more we give thanks for Your sacrifice for us so that we may be saved. In the Name of Jesus.  Amen.
Posted by Ronald L Yahr, Jr at Monday, March 14, 2016