Are You Willing to be a Candle? 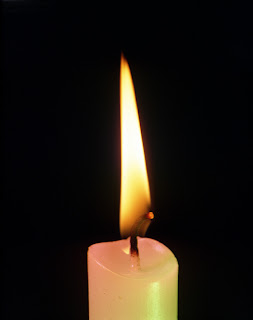 Author Nell Mohney tells about a friend of hers who is consistently upbeat. This woman's outlook was contagiously. But when Nell complimented her friend, the woman confessed that she had not always been like that.

One day many years earlier, this woman's husband confronted her about her constant complaining. When the woman protested, her husband pulled out a tape recorder on which he had secretly been taping their conversations. As the woman listened to herself on the tape, she began to cry. Was that really how she sounded? Right then and there, she prayed that God would show her who he wanted her to be.

A week later, this woman remembered an article she had read about an organization called "The Christophers." Their motto had made a deep impression on her: "It is better to light one candle than to curse the darkness." The woman realized that she had been living in darkness for too long. She began an intensive Bible study focusing on any verse that mentioned light. A new and deepened faith, along with some counseling from their minister, completed the woman's transformation. Her attitude was permanently changed.

Will you allow God's light to shine through your positive attitude?

The light of the eyes rejoices the heart, and good news refreshes the body.

Dear Lord, touch us and heal us, so that we will be a candle in the dark world around us. In Jesus’ Name, Amen

Email ThisBlogThis!Share to TwitterShare to FacebookShare to Pinterest
Labels: candle