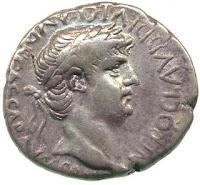 The Pharisees were again plotting against Jesus. They had a question for him. They were trying to trap him into saying something that would discredit him. The Pharisees wanted to silence him and make him look bad in front of the crowd. Being the hypocrites that they were they baited their trap with a compliment. "Teacher, we know that you are sincere," one of them said, "and teach the way of God in accordance with truth." Say, what? They did not believe that for a minute, but they wanted the people listening to think they were giving Jesus a fair chance.

Jesus knew the Pharisees were trying to trap him. Fortunately he was wiser than they. He asks, "Show me the coin used for the tax." Jesus is using a subtle strategy here. One Pharisees produced a Roman coin from his pocket. Little did the Pharisee realize that in even possessing a Roman coin he already was well on the way to losing the argument. The Jewish people found the inscription on the Roman coins offensive, "Tiberius Caesar, Son of the Divine Augustus, Pontifex Maximus." To the Jewish people the inscription on the Roman coin was a deliberate break with the Ten Commandments that prohibit "graven images." For these and other reasons the Jewish people did not use Roman coins. They had their own temple currency. In producing a Roman coin the Pharisee showed which side he was really on.

Where we spend our resources says which side we are really on too.

Dear Lord, may our support for your work clearly say that we are for you. In Jesus’ Name, Amen.

Email ThisBlogThis!Share to TwitterShare to FacebookShare to Pinterest
Labels: spending